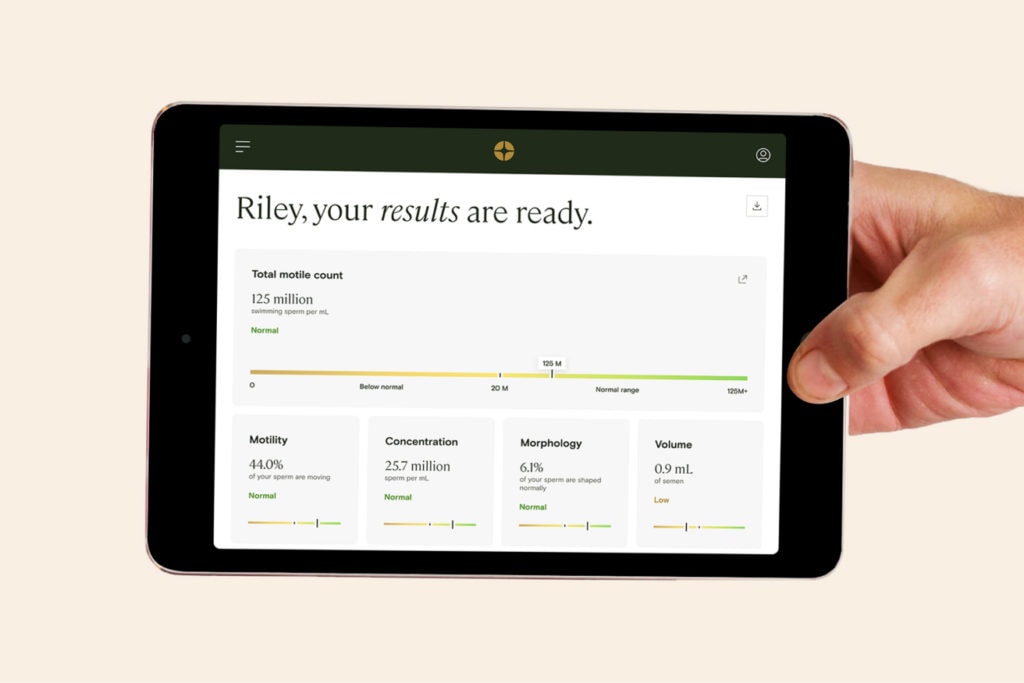 How to read a semen analysis report

What is a semen analysis?

A semen analysis is a test that looks at key metrics of your semen to evaluate sperm health and viability. A semen analysis usually involves looking at the number of sperm (sperm count), its shape (morphology), and the way it moves (motility). Sperm is the male reproductive cell, so its health is of the utmost importance to your fertility, or ability to have a child.

Getting a semen analysis is a primary step in male fertility testing. To get a semen analysis, a person must provide a semen sample, either at a clinic or with an at-home sperm testing kit. This sample will then be analyzed by andrologists, sperm science experts, in a lab.

When to get a semen analysis

You may want to order a semen analysis and sperm testing kits, or ask your doctor about getting this test done, if:

What can I learn from a semen analysis?

A semen analysis can help you gain a better understanding of your own fertility by analyzing crucial metrics of your sperm health. It can also give clues to other issues, such as abnormal hormone levels or infections, that can affect your fertility and your overall health. If you’ve been having trouble conceiving, a semen analysis and a sperm testing kit may help reveal clues about what specific part of your fertility has been affected so you can get the treatment you need.

Frequently asked questions about how to read a semen analysis report

Will a semen analysis tell me if I can have kids?

No. A semen analysis report won't diagnose you as “fertile” or “infertile.” This type of diagnosis can only occur if you’ve been trying to conceive for 6–12 months or more without success. Sperm health, while an important part of a couple’s fertility, is just one piece of the puzzle.

However, sperm health is closely correlated with a couple’s chance of a healthy pregnancy. Therefore, a semen analysis can give you clues about why you may be having difficulty conceiving, or what issues could be improved before or as you start trying.

What should I do if I get abnormal semen analysis results?

If you receive abnormal semen analysis results, you may want to repeat a semen analysis to confirm the results. In some cases, abnormal results may be caused by a spilled or contaminated sample, illness, or the failure to abstain from ejaculation 2–5 days before producing your sample.

If you’ve received abnormal semen analysis results, you may want to speak to a male fertility specialist, such as a urologist. A specialist can help you identify what might be causing your abnormal sperm metrics and suggest next steps to improve your fertility.

A semen analysis report won't diagnose you as “fertile” or “infertile.” This type of diagnosis can only occur if you’ve been trying to conceive for 6–12 months or more without success. Sperm health, while an important part of a couple’s fertility, is just one piece of the puzzle.

If I get abnormal semen analysis results, am I definitely infertile?

No. Semen parameters can also change in reflection of your lifestyle and overall health.

What does it mean if I have round cells in my semen analysis?

Round cells are typically leukocytes, or white blood cells. Though leukocytes are normally present in semen, a high number of them may indicate an infection.

Round cells can also be immature germ (sperm) cells. According to this 2013 study, if round cells in semen are identified as immature sperm cells, there may be an issue of poor sperm motility or testicular dysfunction.

What does it mean if I have bacteria in my semen analysis?

Bacteria in the semen may indicate that you have an infection, such as an STI or prostatitis (inflammation of the prostate gland). Finding the reason for this bacteria and getting proper treatment is crucial, since research shows that such bacteria could impair fertility through decreasing sperm motility, morphology, and DNA integrity.

What does it mean if I have debris in my semen analysis?

Debris in your semen may simply indicate the presence of epithelial cells, a type of cell that covers the inside and outside of the surfaces of your body and may be found in the urinary tract. Though a certain amount of debris can be expected, high levels warrant an investigation — this could indicate an infection.

Still have questions about your semen analysis report? Feel free to contact Legacy for more information. Legacy’s at-home sperm testing kit is the most scientifically advanced at-home option on the market. Results of Legacy’s semen analysis are comparable to what you would receive from a conventional, in-person semen analysis. You also have the option to freeze your sperm if it is determined to be viable.

Skip the trip to the clinic and collect your sample at home, send it off to our lab, and you’ll receive your results in 24–48 hours, along with personalized recommendations to improve your sperm.

Legacy is the only at-home sperm testing kit that includes a post-thaw analysis, in which part of your sample is frozen and thawed to check viability. Thanks to this additional analysis, your semen analysis report will let you know if your sperm is a good candidate for long-term freezing.

What is included in Legacy’s semen analysis report

Though most semen analysis reports are generated with doctors in mind, Legacy’s report is designed to be simple, straightforward, and incredibly thorough. It’s delivered via your confidential digital dashboard in just 1–2 days, and includes more than just the numbers — it also explains what these numbers really mean, for you and your family plans.

If you’ve opted to add a DNA fragmentation test, you will also receive an analysis of your sperm’s genetic health in addition to the five key metrics listed above. Legacy is the only at-home sperm testing kit that offers DNA fragmentation analysis.

Along with delivering insights into key metrics of your sperm health, your Legacy semen analysis report and at-home sperm testing kit will also give you personalized recommendations on what lifestyle changes you should consider to improve your sperm. Plus, Legacy clients get exclusive access to book a virtual appointment with a fertility specialist.