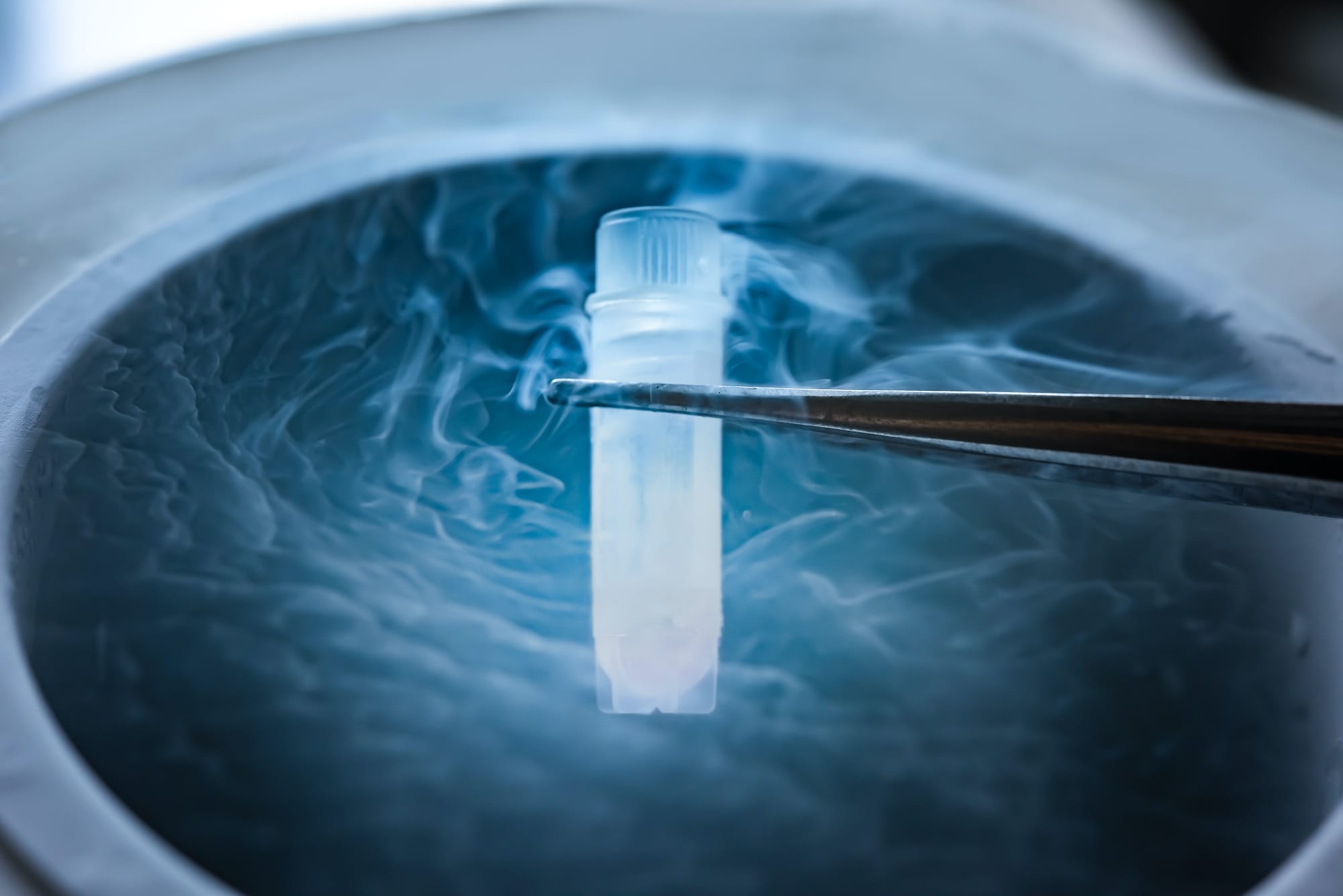 Many of us tend to think of sperm freezing as a modern-day convenience made possible through cutting edge technology, but its roots actually date back as far as the 18th century. In 1776, the Italian scientist Lazzaro Spallanzani noted that sperm cooled by snow became motionless. Since then, many advancements have made sperm freezing an accessible part of the family planning journey — no snow necessary. Let’s explore the history of sperm cryopreservation and sperm storage, why someone would freeze their sperm, sperm freezing costs, and at-home sperm freezing kits.

Sperm freezing and sperm storage is the process of using liquid nitrogen to cryopreserve a sample (or samples) of a person’s sperm. By dropping the sperm to -196ºC, cryopreservation pauses all biological activity, and the sperm is effectively “frozen in time.” It can then be thawed and used later to try to conceive.

Sperm freezing is an effective way to preserve one’s fertility before undergoing a treatment or procedure that may hinder the chances of naturally conceiving a child. Such treatments include those for cancer, like chemotherapy, radiation therapy, or an orchiectomy. Freezing sperm before a gender transition can also allow a trans person to parent a biological child after transitioning. (Review our guide on fertility preservation for trans women for more information.)

Sperm quality declines with age. So if a person is not ready to have a child now, they may want to preserve their high-quality sperm while they’re still young, to use at a later date. Finally, sperm freezing can also be useful for someone with a high-risk job, such as those in the military, law enforcement, or other first-line responders whose careers risk potential bodily harm, exposure to hazardous chemicals, or prolonged departure from their partners.

Long after Spallanzani’s discovery, a number of scientists observed that sperm could survive freezing and storage temperatures as low as -321º F, in experiments between 1938 and 1945. But the first major breakthrough occurred in 1949, when a team of scientists led by A.S. Parkes developed a method of using glycerol to protect sperm from damage during freezing.

These findings were further refined by Dr. Jerome K. Sherman, now considered an American pioneer in sperm freezing and sperm storage. Like his predecessors, Sherman preserved human sperm using glycerol. However, he combined this with a technique known as “slow cooling” of sperm — in which sperm are gradually brought down to a very low temperature — and then stored the sperm with solid carbon dioxide (dry ice) as a refrigerant.

This technique allowed him to place sperm in short-term storage, then thaw and use it to successfully fertilize a human egg and induce its normal development. His work resulted in the first human birth using frozen sperm, reported in 1953.

Despite his success, the public was not so quick to celebrate this achievement. When the Cedar Rapids Gazette ran the headline “Fatherhood After Death Has Now Been Proved Possible,” both Sherman and his colleague Raymond Bunge received heavy criticism. Artificial insemination was called “illicit and immoral” by the Catholic Church, and the New York Academy of Medicine stated it was “rarely a solution” to a barren marriage.

Nonetheless, these doctors paved the way for the entire sperm banking industry. By 1963, liquid nitrogen became the preferred method of long-term sperm freezing and sperm storage, making the process more widespread in healthcare. Liquid nitrogen is also used to maintain the very low temperatures of -196ºC required to keep sperm frozen. With this new freezing and storing method, doctors were able to use sperm that had been stored for as long as 40 years. Liquid nitrogen is still used to freeze sperm today.

Sperm freezing and sperm storage techniques continue to improve over time. By 1997, researchers figured out how to freeze a single sperm, a revolutionary finding for patients with low sperm counts. And by 2002, sperm vitrification was developed as an alternative to slow freezing. Sperm vitrification uses ultra-rapid cooling to freeze sperm and has been shown to have higher recovery rates in some studies.

A sperm bank is a facility where sperm is stored until it is ready to be used. The first sperm bank was opened in the state of Iowa in 1964 by Drs. Jerome Sherman and Raymond Bunge. In 1964, another sperm bank also opened in Tokyo, Japan. Both banks were established for the purpose of offering a medical therapeutic approach to support infertile individuals. As sperm banking continues to thrive, the market is expected to reach a value of nearly $5 billion USD with a compound annual growth rate of 3.5% by 2025.

The sperm freezing process in 2022

The sperm freezing process involves a number of steps between providing the sample and storing it in the “freezer” (actually a storage dewar filled with liquid nitrogen).

Providing a sample usually entails ejaculating into a container, which can take place in a clinic or with an at-home sperm freezing kit and sperm testing kit. Some individuals may require sperm extraction or aspiration techniques to provide their sample.

Before storing, lab technicians will run a semen analysis to ensure the sample is viable for freezing. This includes testing sperm parameters like volume, count, concentration, motility, and morphology.

The sperm will then go through some processing, such as “washing,” to remove the semen plasma and any other contaminants. Small amounts of cryoprotectant are also used to prevent damage during freezing.

The sperm is then separated into vials, slowly frozen in liquid nitrogen to -196º C, and stored at a banking facility (also at -196ºC). Some of the sample will also go through a post-thaw analysis to assess how many sperm survive and remain motile after the freezing process.

How long does frozen sperm last?

Though there is a small decrease in sperm’s survival rate the longer it is frozen, researchers have concluded that long-term cryostorage of semen in a human sperm bank does not affect its clinical outcomes. Once frozen, sperm can survive indefinitely and still be viable.

Human babies have been born from sperm frozen for up to 40 years. The oldest sperm sample to result in a live birth in animal studies was frozen for 50 years.

During IUI, sperm is thawed and inserted directly into the uterus, bypassing the vagina and cervix. Often with the help of ovulation medication, the procedure is scheduled at the time of ovulation. This option is ideal for those with a total motile sperm count (TMSC) of more than 8 million.

The IVF process involves extracting egg(s) from the ovaries, fertilizing them with sperm in the lab to create embryos, and placing one or more embryos into the patient’s uterus for gestation. Fertility medication is typically used beforehand to stimulate the ovaries to produce multiple eggs.

ICSI is an IVF technique in which a single sperm is injected directly into an egg. This process is ideal for those with low sperm parameters and those struggling with male-factor infertility.

Frozen sperm can be thawed and used for any of the above procedures. Studies have shown that frozen sperm is equally as successful as “fresh” sperm — sperm produced on the day of the procedure and never frozen — when it comes to resulting in live births.

Preserve your legacy with sperm freezing

Once you freeze, your fertility is protected against illnesses, accidents, medical treatments, and aging.
See sperm freezing options Some sperm banks charge an initial testing fee of $1,000 with an additional $300–$500 per year for ongoing sperm storage.

Legacy’s semen analysis kit costs $295, and sperm storage costs start at $120 per year, a much lower cost than going through a traditional clinic. There are also sperm storage package options with additional savings depending on how long you want to freeze and the option to pay in installments. All packages include personalized recommendations and guidance from male fertility experts.
Learn more about how at-home sperm freezing kits work with Legacy and explore our sperm freezing FAQs for more information.