Read on to understand more about fertility preservation and sperm freezing for trans women, and how Legacy’s at-home sperm freezing kits and semen analysis can help.

While we’ll be using the phrases “trans women” and “transgender women” here, this guide applies to any sperm-producing person considering gender transition, regardless of identity. 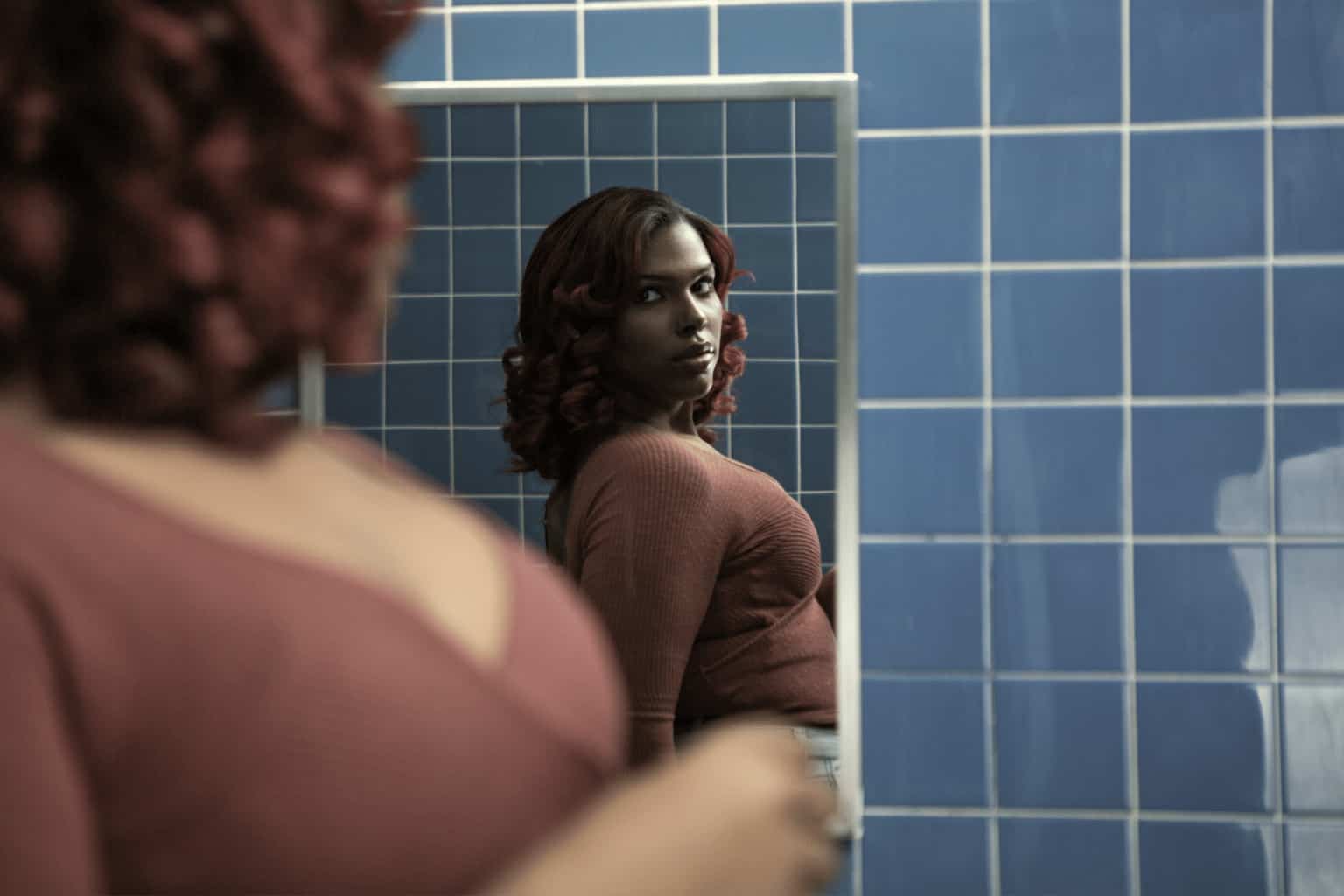 There are three possible “steps” in gender transition. Which steps a person undertakes, and the timeline between them, is individual, and dependent on their personal gender identity, how they want to present, their financial resources, and their medical history. Understanding these steps is crucial to deciding when to pursue fertility preservation.

During this step, a person may change their pronouns and/or name. They may “come out” as trans to their family and friends. They may also change their appearance and clothing. Often, the goal is to affirm a person’s gender identity by adopting a more feminine or gender-fluid presentation.

At this step, a person may seek care from a medical provider to access gender-affirming hormone therapy. For assigned-male-at-birth people, this hormone therapy usually involves taking estrogen, often considered a “female” hormone (although all sexes produce some level of estrogen).

Many trans women also take anti-androgen medications. Androgens, such as testosterone, are “male” hormones that are found in higher levels in sperm-producing people; anti-androgens or “androgen blockers” are medications that prevent testosterone from affecting the body as it typically would.

As gender-affirming hormone therapy can have a significant impact on a person’s ability to produce healthy sperm, fertility preservation, namely sperm freezing options, can be considered at this stage.

There are many different directions a trans woman can take with surgical transition. “Top surgery” refers to surgery performed above the waist; for trans women, that’s sometimes breast augmentation (implants). “Bottom surgery” is surgery performed below the waist, typically to the genitals.

Bottom surgery may involve one or more of these three options:

These surgeries involve different levels of complexity and recovery. Not every trans woman will choose to have bottom surgery (or surgery at all).

The process of gender transition may affect fertility in several different ways. Learning the potential effects is important when considering fertility preservation.

The impact of “tucking” on sperm

Some trans women who are pre-operative or have not chosen surgery practice tucking, a way to hide the penis and the testes. Tucking can be done by moving the penis and scrotum between the buttocks, or by pushing the testicles up into the inguinal canals (where the testicles reside before “dropping” during infancy), and securing with tight underwear or tape.

While tucking gives a more desirable presentation for many trans women, it can be damaging to spermatogenesis, the process of sperm production in the testicles. Testicles hang away from the body in the scrotum because sperm production requires a temperature approximately 5.5ºF lower than body temperature. Tucking or wearing tight undergarments increases the heat in the scrotum by up to 5ºF, impairing sperm production. This may be why trans women are more likely to have have poor sperm quality compared to cis men, even before they begin hormone treatment.

The correlation between tucking and low motile sperm count has been directly demonstrated. In fact, the act of tucking has been investigated as a potential contraceptive practice for cis men in several studies. In one study, researchers found that those who practiced tucking had very low motile sperm counts and a 0% pregnancy rate. In another, sperm production decreased by 97% after 2 months of daily tucking.

The good news is that sperm impairment caused by tucking appears to be entirely reversible within several months of pausing the practice. Still, this may be an important consideration for trans women who are considering sperm freezing for potential use later. 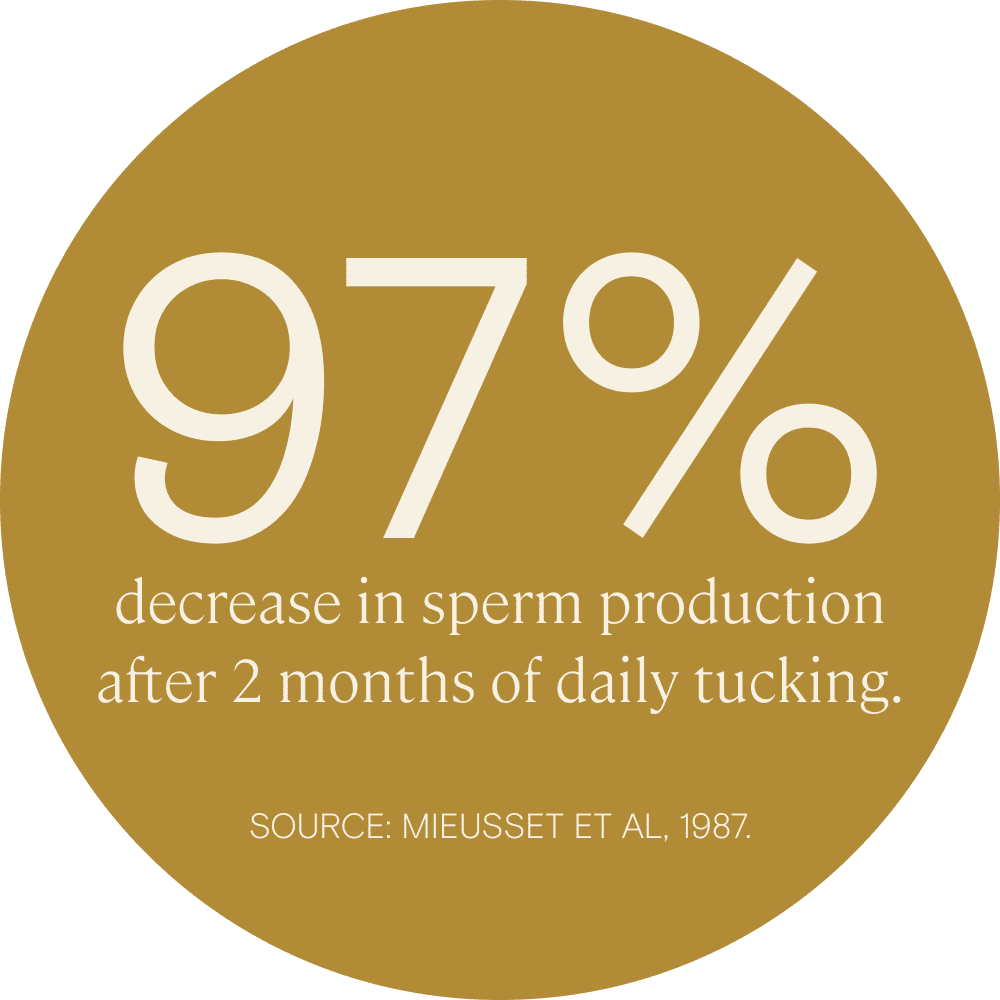 Testosterone is essential to the production of sperm. It plays a role in initiating several key processes in spermatogenesis, including the division and maturation of sperm cells. The goal of hormone therapy for transgender women is to decrease testosterone and increase estrogen levels to create a more typically feminine appearance. Estrogen therapy helps decrease testosterone levels in the body. Many trans women also use anti-androgens to further decrease their testosterone to typical female levels (around 70 ng/ml).

Testosterone levels under 264 ng/ml are associated with poorer semen parameters. And, as we would expect, use of estrogen and androgen-blockers is associated in research with poor sperm quality and lower sperm count. A 2017 review looked at nearly 40 years of research on the impact of cross-sex hormones on the sperm quality and testicular function of trans women. The review found that, in the majority of cases, estrogen and/or anti-androgen treatment caused reduced or halted spermatogenesis, as well as physical changes to the testicles.

How long does it take for hormone replacement therapy (HRT) to impair fertility?

In some cases, it appears to be. One study suggested that, within 6 months of stopping estrogen therapy, 67% of subjects recovered a normal sperm count.

However, the impact of medical gender transition on fertility, as well as the capacity for spermatogenesis to recover if estrogen treatment is paused, seem to be variable and individual. Case studies demonstrate that, while some patients continued spermatogenesis through gender-affirming hormone treatment, others stopped producing sperm altogether, and several experienced azoospermia for 4–5 months after pausing therapy. 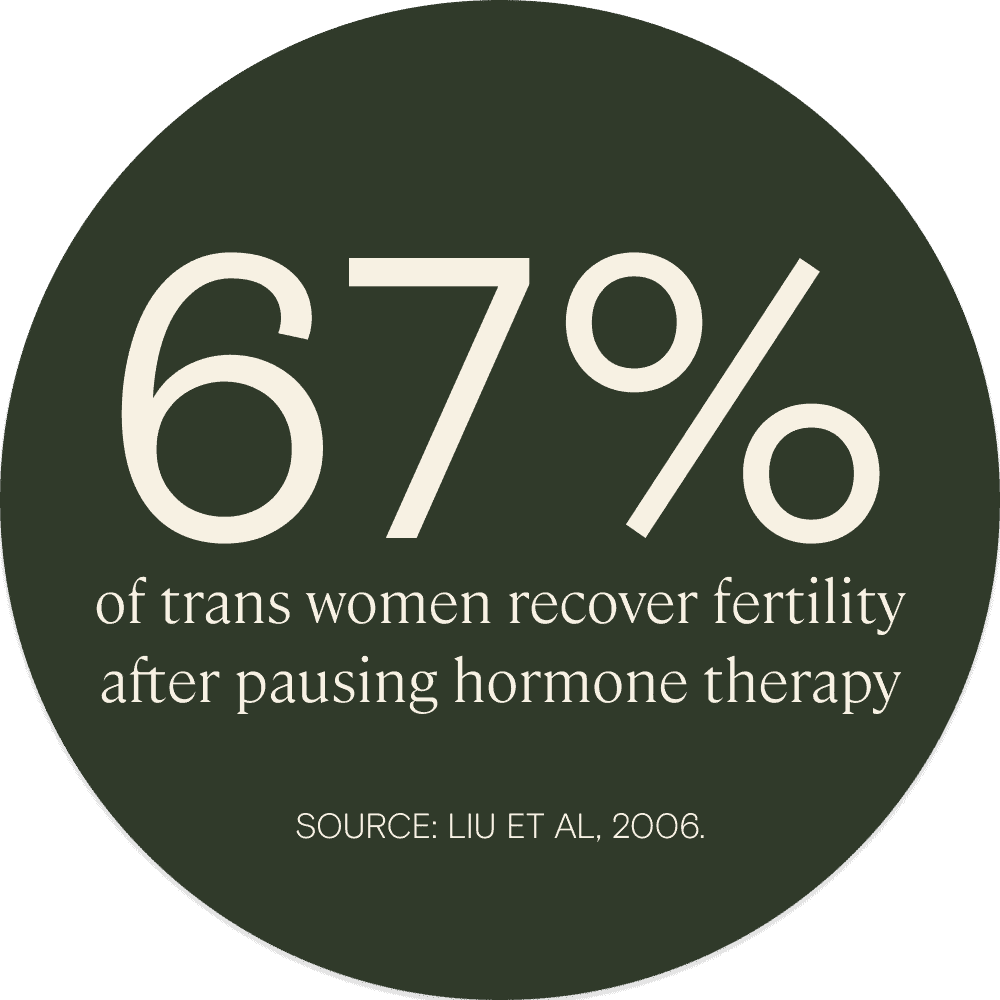 The fertility impact of bottom surgery for trans women

The primary fertility preservation option for assigned-male-at-birth trans people is sperm freezing or cryopreservation. Sperm freezing is the process of freezing one or more semen “samples,” or ejaculations, for potential use to attempt to conceive later on. 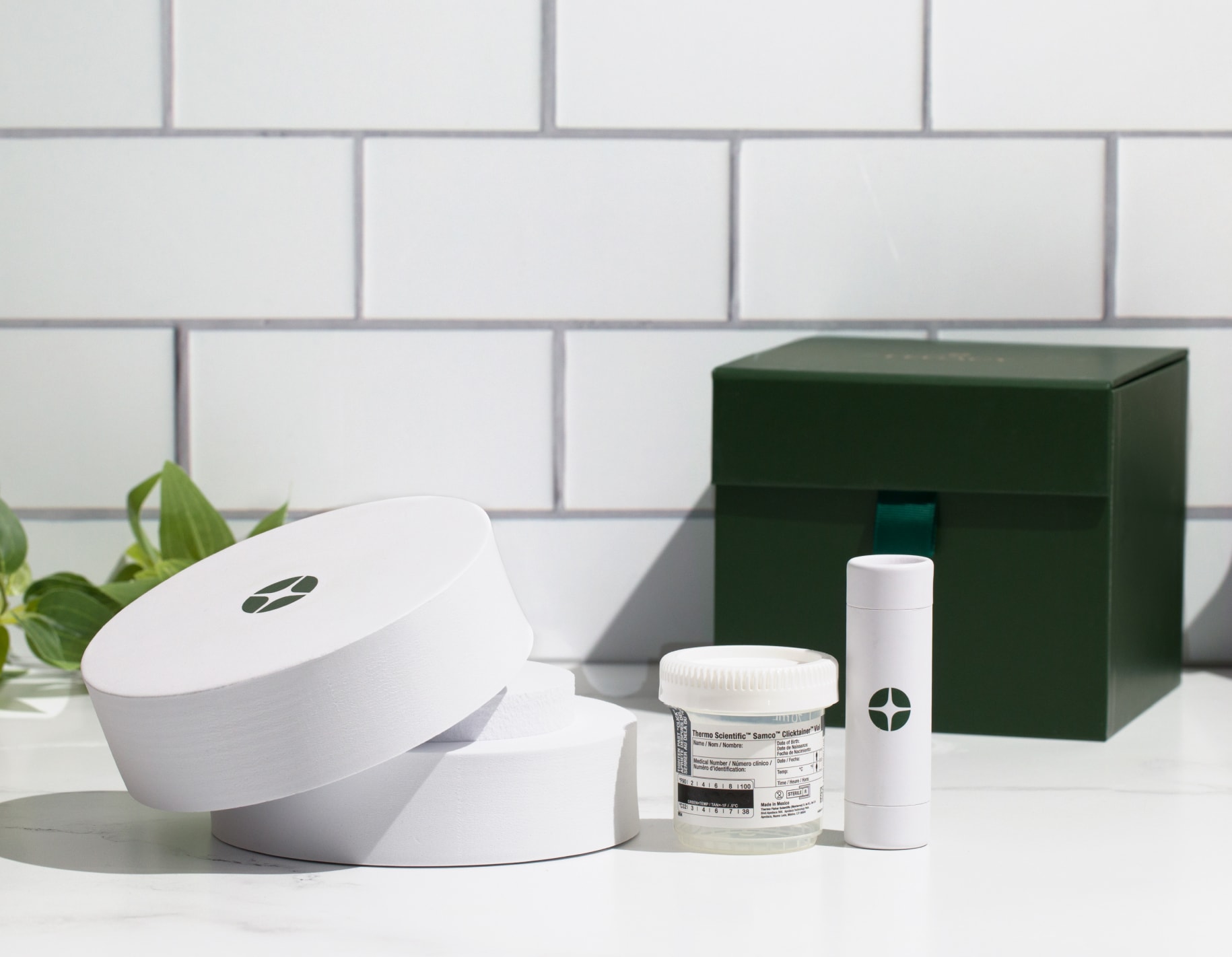 In the past, the process of sperm freezing required you to visit a fertility clinic or sperm bank to produce a semen sample in a “collection room” on-site. This can be an uncomfortable experience for many people, including trans women. Legacy offers at-home sperm freezing kits and semen analysis that allows you to mail your sample to our labs for clinic-grade analysis and cryogenic storage. This remains the primary fertility preservation option for assigned-male-at-birth trans people.

When should a trans woman freeze her sperm?

Estrogen and anti-androgen medications may significantly impair sperm production. Freezing sperm prior to beginning medical transition will typically offer the best results. Trans women and girls can consider sperm freezing options as soon as they hit puberty and are able to produce a semen sample.

However, if you started HRT without preserving your fertility, you still have options. It may be a good idea to start with a semen analysis, to determine whether your hormone protocol has impacted your fertility. If it has, you can take a 3–5 months off of gender-affirming hormone therapy to allow spermatogenesis to resume and sperm quality to improve. A semen analysis is a good first step in the path towards fertility preservation.

Most of the changes to a trans woman’s physical appearance that happen as a result of hormone therapy are not permanent, and stopping cross-sex hormones will lead to reversal. Therefore, taking a pause in feminizing hormones can trigger a trans person’s gender dysphoria and be difficult physically, socially, and emotionally. It may be helpful to work with the support of a gender-affirming counselor or therapist throughout this process. 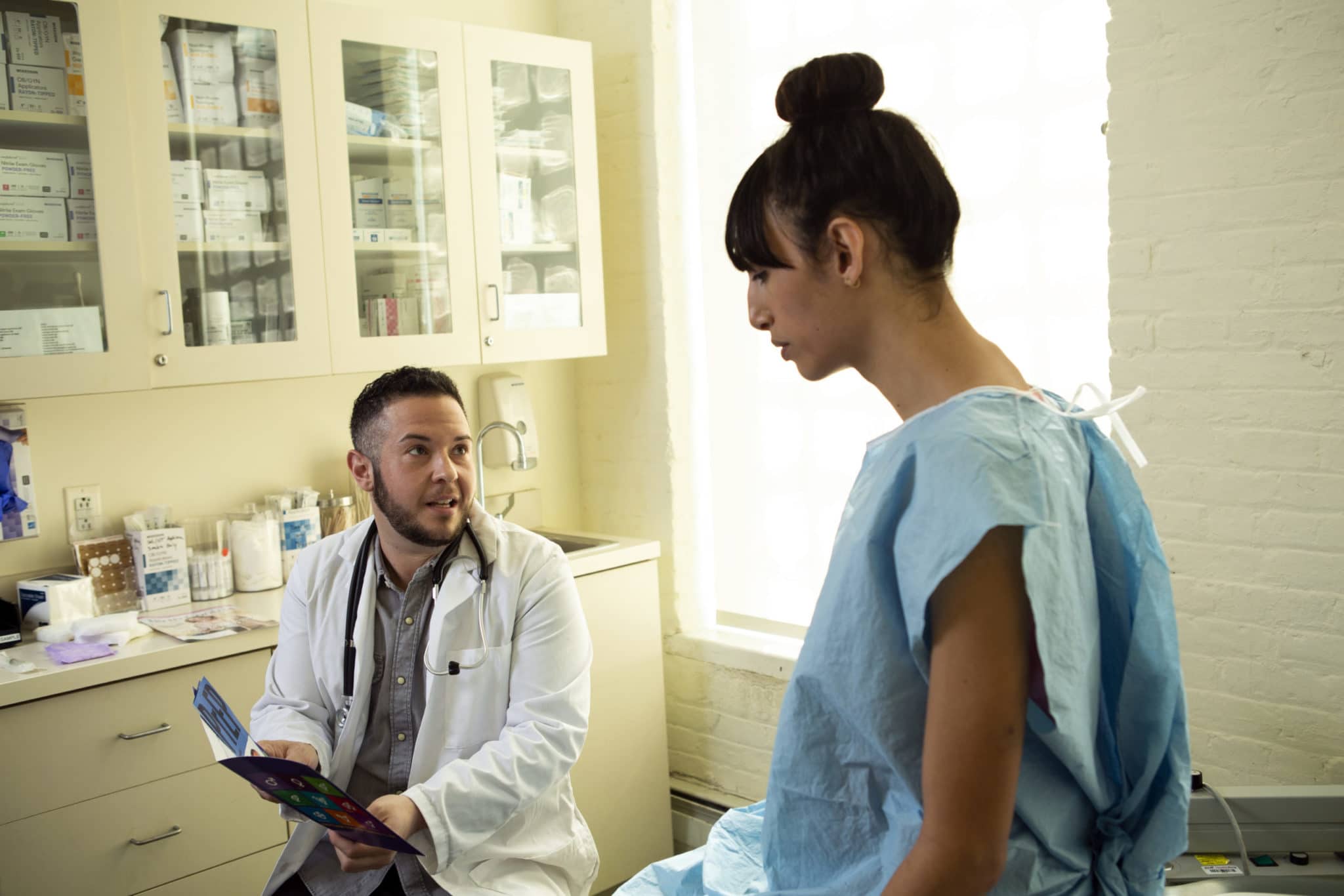 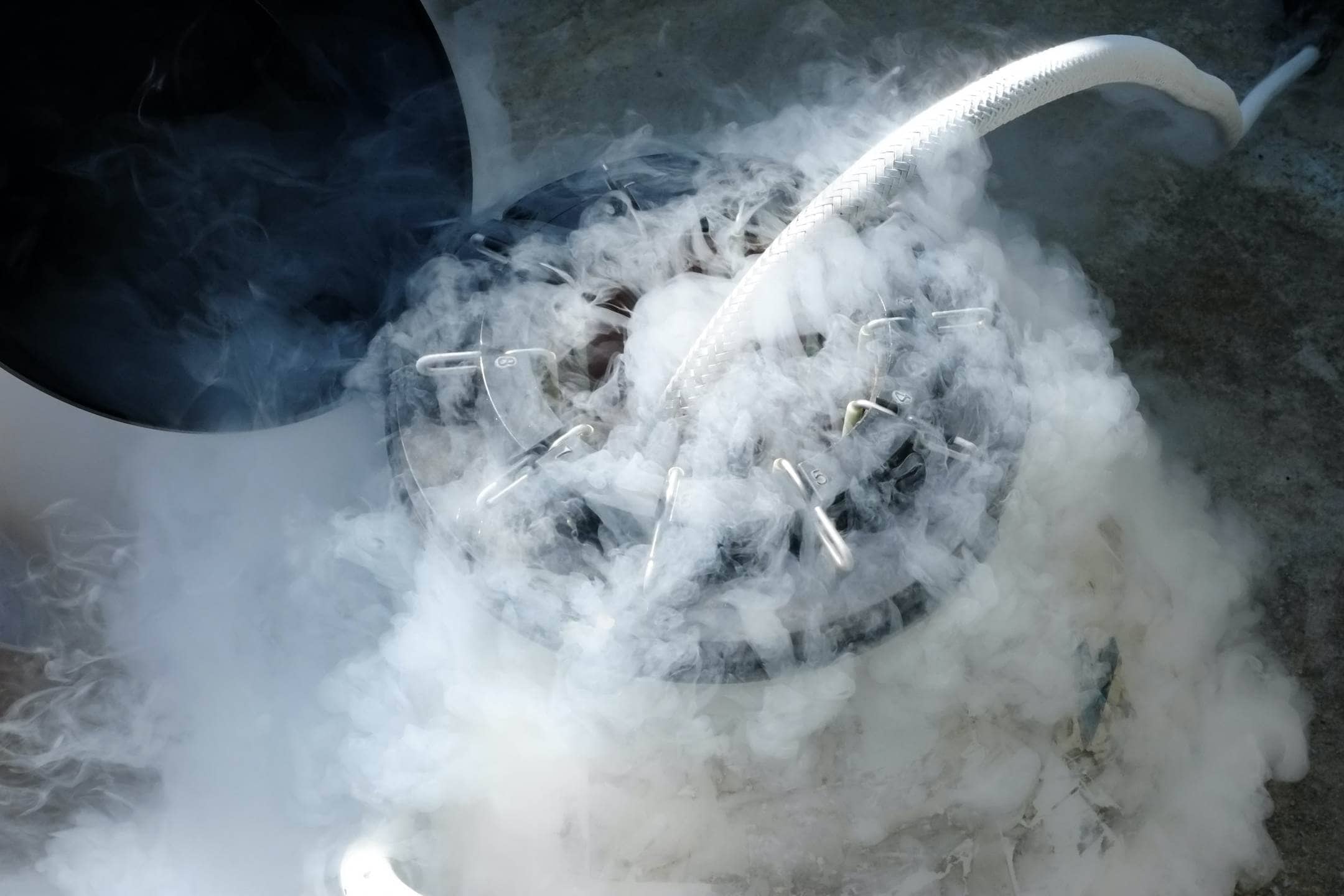 How much does sperm freezing cost for trans women?

According to LIVESTRONG, the average sperm freezing cost  is $1,000, plus $300–$500 per year for ongoing cryogenic storage. In some states, and under some insurance plans, this may be covered for trans women; for many people, though, it’s an out-of-pocket cost.

Part of Legacy’s mission is to increase the accessibility of fertility care and fertility preservation. We offer a few different packages — an analysis package and two options for sperm freezing — that start at $295, with storage that’s less than $200 per year.

Fertility options when you’re ready to be a parent

If you are a trans woman and you’re ready to be a parent, your options depend on where you are in your transition process, and whether or not you have a partner with a uterus.

If you have a partner with a uterus

Options for those who have a penis and testicles and haven’t frozen their sperm:

First, you can do a semen analysis to determine how significantly your hormone therapy has affected your fertility.

If the semen analysis determines you are still producing some healthy sperm, you can attempt to conceive with your partner naturally (via sexual intercourse). Alternatively, you could do an IUI if you want to increase the chances of pregnancy or are not comfortable with penis-in-vagina sex. Sperm freezing is also an option, ensuring you can create a pregnancy later.

If your semen analysis determines you’re not producing healthy sperm, you may be able to recover fertility by stopping hormone therapy for 3–5 months. You could also try IVF with ICSI, which requires only a single healthy sperm and can help achieve pregnancy even when sperm are very few, or motility/morphology is poor.

Options for trans women who have frozen their sperm:

If you have frozen sperm available, you can attempt pregnancy with your partner without stopping your hormone therapy. Frozen sperm can be used in IUI, IVF, or IVF with ICSI, depending on the quantity and quality of the sample once thawed. That’s why sperm freezing is an important consideration for fertility preservation. 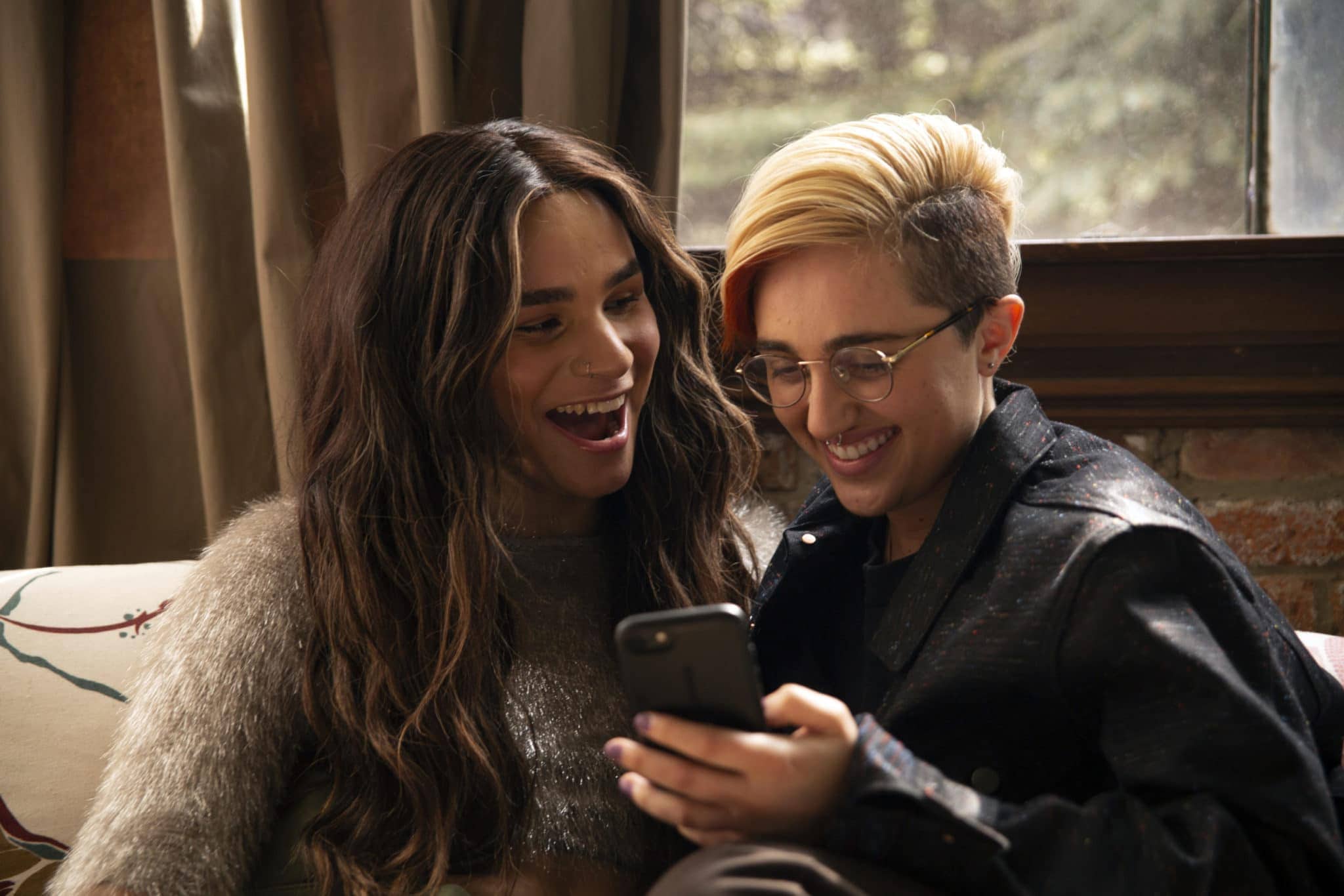 If you do not have a partner with a uterus

Surrogacy (gestational or traditional) is an option for you. You can attempt to use a “fresh” semen sample from yourself or your partner — again, you will want to do a semen analysis first to determine if you are producing healthy sperm. Or, if you have frozen your sperm first, you can use it in IUI, IVF, or IVF with ICSI to create a pregnancy with your surrogate’s egg or an egg donor.

Considering fertility preservation as a trans person can be an emotional process. It can be difficult to think about all of the options you may want to have in the future, especially if you are starting your transition in your teens or early 20s, when family-building is often not top of mind.

Fertility preservation as well as accessing fertility care such as IUI and IVF is also expensive. Sperm freezing options can lower this cost in the long run.

It may be helpful to seek guidance and support throughout the fertility preservation or treatment process from a trans-affirming therapist or organization. 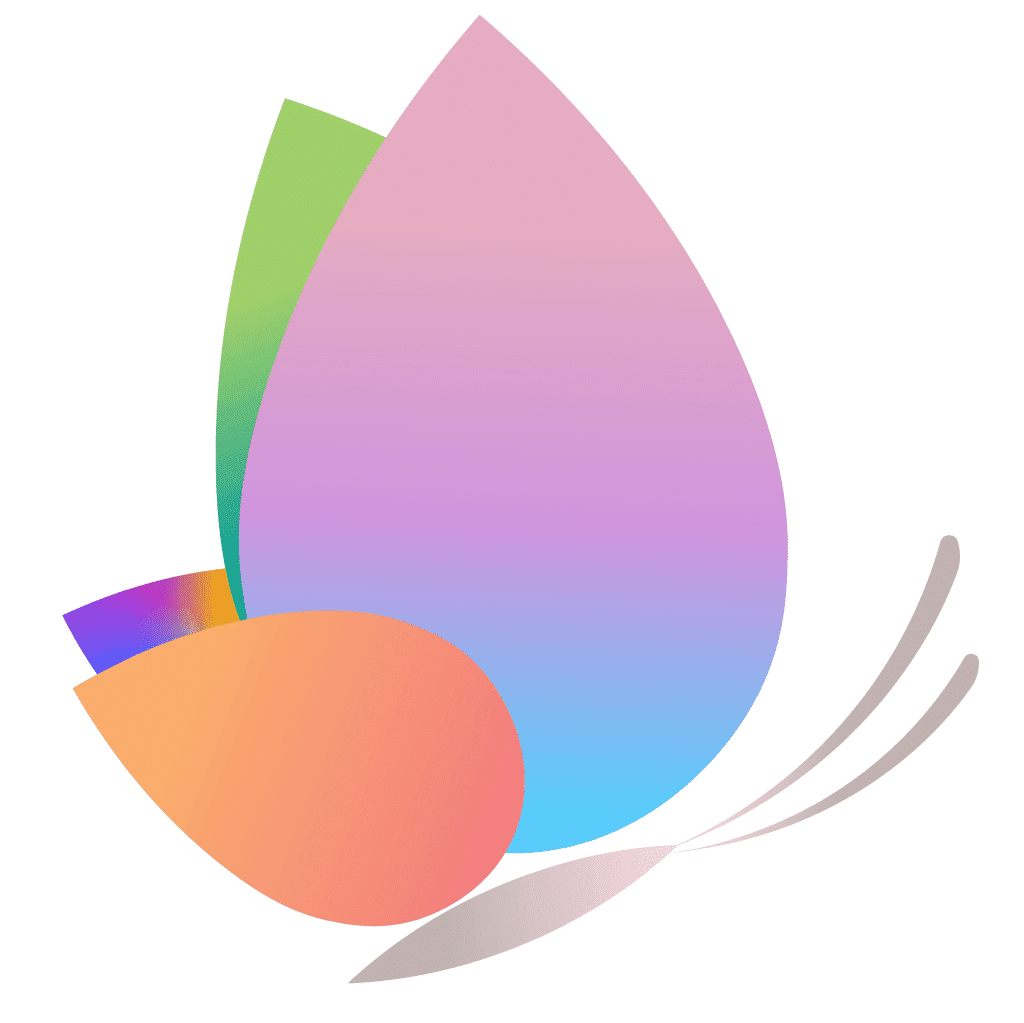 Euphoria offers a suite of digital apps specifically designed for trans people. Apps include Solace, which gives virtual guidance and information for every step of transition; Bliss, a money management app for those saving for medical transition; and Catharsis, a mental health support platform for the trans community, by the trans community. 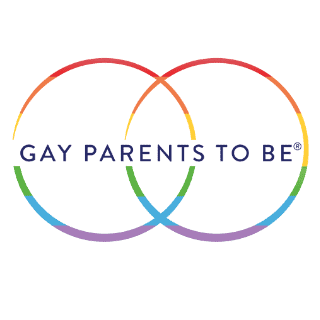 Gay Parents to Be

Gay Parents to Be is an informational resource for LGBTQ family-building and parenting, including trans parents. This organization offers guidance for those considering fertility preservation pre-transition or hoping to start a family, including mental health support and financial guidance, such as a list of fertility grants and assistance in understanding insurance coverage. 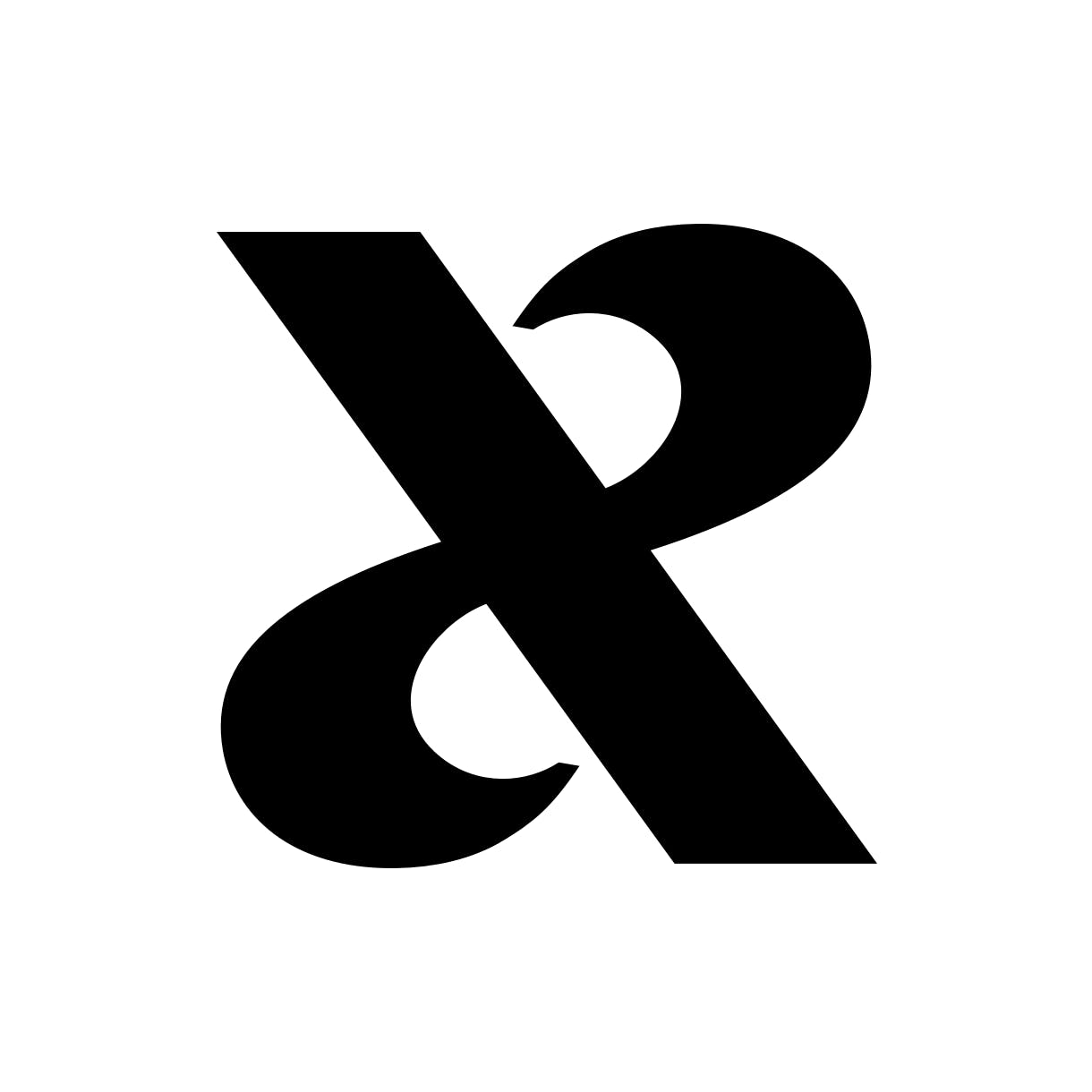 You now know more than most people about male fertility.

Keep the learning going. Enter your email to get science-backed resources (plus exclusive discounts).

You now know more than most people about male fertility.

Keep the learning going. Enter your email to get science-backed resources (plus exclusive discounts).