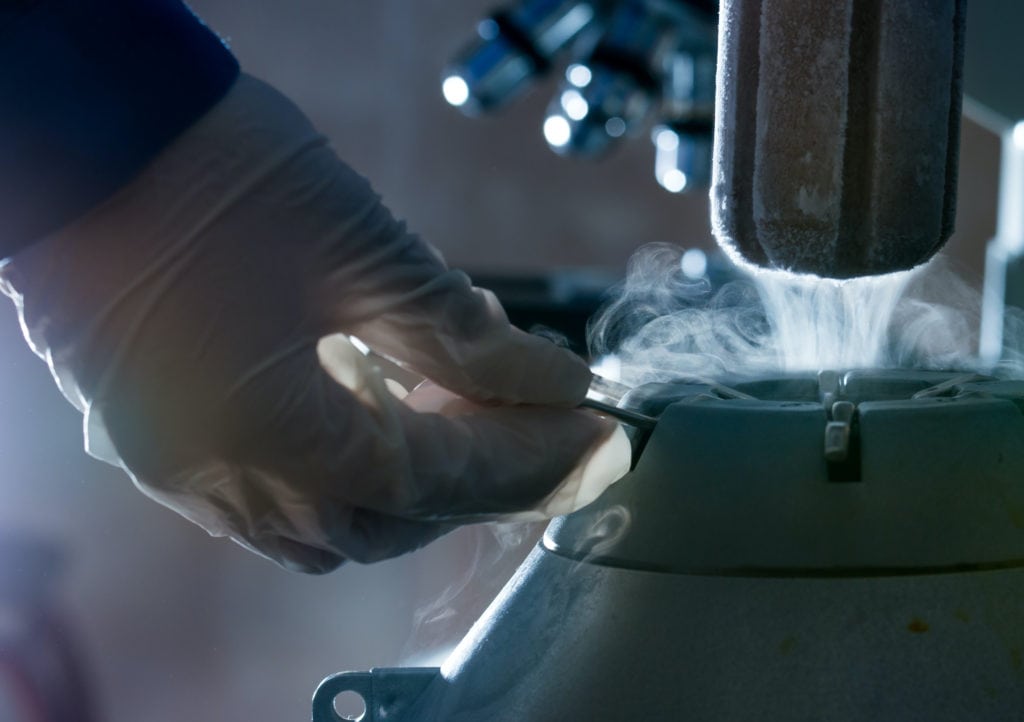 In the largest study of its kind, researchers at Massachusetts General Hospital and Harvard Medical School have determined that cryopreserved, or frozen, sperm is just as effective as “fresh” sperm in intrauterine insemination (IUI) procedures.

These findings, presented by researcher Dr. Panagiotis Cherouveim, are likely attributed to improvements in sperm freezing techniques, and are an update to previous research that deemed frozen sperm slightly less effective for IUI.

This new study should provide reassurance to those who are considering sperm freezing as a way to protect their ability to have children later, as well as those who are using frozen sperm from a sperm donor.

In the 2022 study, Cherouveim and his colleagues analyzed 5,335 intrauterine insemination cycles performed at his center between 2004 and 2021. Intrauterine insemination, or IUI, is a fairly simple procedure in which sperm is “washed” and placed directly inside the uterus during ovulation, helping sperm get closer to the egg and improving chances of conception.

In the new study, researchers found similar clinical pregnancy rates between those using fresh and frozen sperm samples. The primary difference researchers noted was that time-to-pregnancy was slightly longer in the frozen sperm group than in the fresh. Additionally, the study found that frozen sperm carried no extra risk of miscarriage.

Researchers concluded that “patients should be counseled about the non-inferiority of frozen sperm,” because “no detrimental effect of sperm cryopreservation on IUI outcomes was noted” in the study.

What previous research says about fresh vs. frozen sperm

Despite widespread use, many patients worry that cryopreservation may reduce the viability of frozen sperm cells or affect their sperm quality. It is true that there will be a small decrease in sperm quality during the freezing and thawing process, because of osmotic and oxidative stress. However, it’s important to note that most semen samples contain an abundance of sperm, and a small decrease does not significantly affect clinical outcomes.

The findings of Dr. Cherouveim and his colleagues stand to revise older research that found frozen sperm to be less effective. In a 1992 study, researchers found that success rates after IUI were greater with fresh sperm compared to frozen (21.2% vs. 15.8%). However, the study only analyzed 198 cycles compared to the 5,335 cycles used in the Cherouveim study. It’s also safe to assume that there have been advances in sperm freezing techniques since 1992, making the 2022 study more relevant in terms of the technology now available.

A study from 2019 found that, while frozen/thawed sperm may have a slight decrease in viability and motility depending on time in storage, clinical outcomes remained unaffected by how long sperm was frozen. The results of that study were as follows:

These findings indicate that once frozen, sperm can be stored for at least 15 years with very little impact on effectiveness, or perhaps longer.

There have long been debates about how long sperm can safely be stored, but one 2013 case broke records when researchers recorded the birth of healthy twins conceived using sperm that had been frozen and stored for approximately 40 years, using intracytoplasmic sperm injection. This case study represents the longest reported storage of human semen resulting in live birth. Researchers determined that sperm can maintain its ability to result in live birth when stored in proper conditions: liquid nitrogen tanks to maintain a very low temperature.

What this research means for you

Because contemporary data from intrauterine insemination cycles has been scarce, this new study from Dr. Cherouveim and his colleagues provides a much needed update to the research.

The viability of frozen sperm means that those who are considering sperm freezing — for whatever reason they choose — can rest assured that they are protecting their ability to have children later. These findings should ease the minds of those who wish to preserve their fertility, and hopefully change the way in which the medical community views frozen sperm in comparison to fresh.

It may also change the considerations for couples who plan to use donor sperm. Anonymous donor sperm, such as sperm purchased from a sperm bank, is typically frozen, while sperm from a known donor may be fresh or frozen. The fact that frozen sperm is just as effective for IUI as fresh should alleviate some anxiety for those who may want to use anonymous donor sperm, or freeze known donor sperm in advance to make the logistics easier.

There are 5 steps to the sperm freezing process: preparation, providing a sample, processing and analyzing sperm, post-thaw analysis, and cryopreservation/storage.

During the preparation phase, an STI screening should be performed to assess whether or not there are any sexually transmitted diseases or infections that can impact sperm quality or that may pose a risk of transmission.

During this time, conducting a sperm analysis is also highly recommended. This analysis will provide data on semen volume, sperm count, sperm concentration, sperm motility, and sperm morphology. The point is to ensure that the sperm being frozen is in the best possible shape it can be — if sperm are less than optimal, simple lifestyle changes to improve fertility may help, such as eating a healthier diet, exercising, taking supplements, and more.

Providing a sample for sperm freezing

When it comes time to provide a sample, you can visit a fertility clinic or a sperm bank, where you’ll produce your sample in a private collection room, by ejaculating into a cup. Alternatively, you can use an at-home sperm freezing kit, allowing you to provide your sample in the comfort and privacy of your home before shipping it directly to the lab.

After sperm is received by the lab, it’s measured to assess semen volume and other key semen parameters, before being “washed” to separate the sperm from the seminal fluid.

The sperm is frozen using liquid nitrogen at -196ºC or lower. Then, it’s transferred to liquid nitrogen storage tanks to maintain that low temperature for long-term sperm storage.

During the post-thaw analysis, a small portion of the sample will be frozen and thawed to ensure that the sperm is still viable after the thawing process, and to give an accurate assessment of how many motile sperm will be available in the future.

Legacy is the only at-home sperm freezing kit that includes post-thaw analysis.

Who should freeze their sperm?

There are many possible reasons a person may choose to freeze their sperm:

Other individuals who may want to freeze their sperm include those considering a vasectomy and those who have high-risk jobs, including serving in the military.

Freezing your sperm is a personal choice, but it shouldn’t be one filled with doubt and fear. This latest research should provide some peace of mind to anyone hoping to make sperm cryopreservation a part of their family planning journey.