When was the last time you thought about your sperm? For most men, the answer is effectively never, and that’s entirely normal. But understanding how sperm works is important. Not only are healthy sperm essential for having biological children, they’re also a marker of your overall health. The goal of this guide is to provide a technical explanation of what exactly sperm is and how it works. 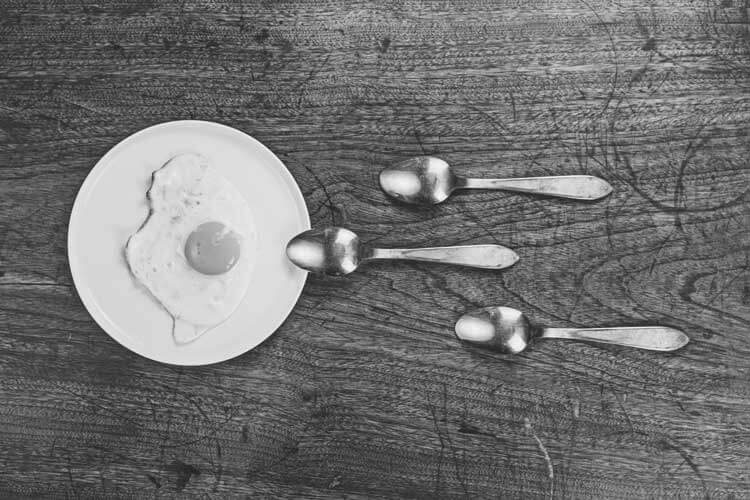 In the simplest of terms, sperm is the male sex cell or “gamete.” Sperm cells are haploid, which means they carry half the amount of chromosomes that typical somatic (non-sex) cells do. A refresher from biology class: chromosomes are made up of DNA, which carries genetic information. When a sperm cell combines with the egg, which is also haploid, they join chromosomes, making a diploid organism with 46 chromosomes. (This process is known as “fertilization.”) This is why you inherit some traits from your father and some from your mother.

Sperm cells are approximately 0.05 milliliters long (or about 2 thousandths of an inch). They’re not visible to the naked eye, but using a microscope, we can see the structure of sperm. They have a few distinct parts: the head, which contains the nucleus where genetic material is carried; a midpiece; and a tail, which propels it for swimming and helps breach the egg. 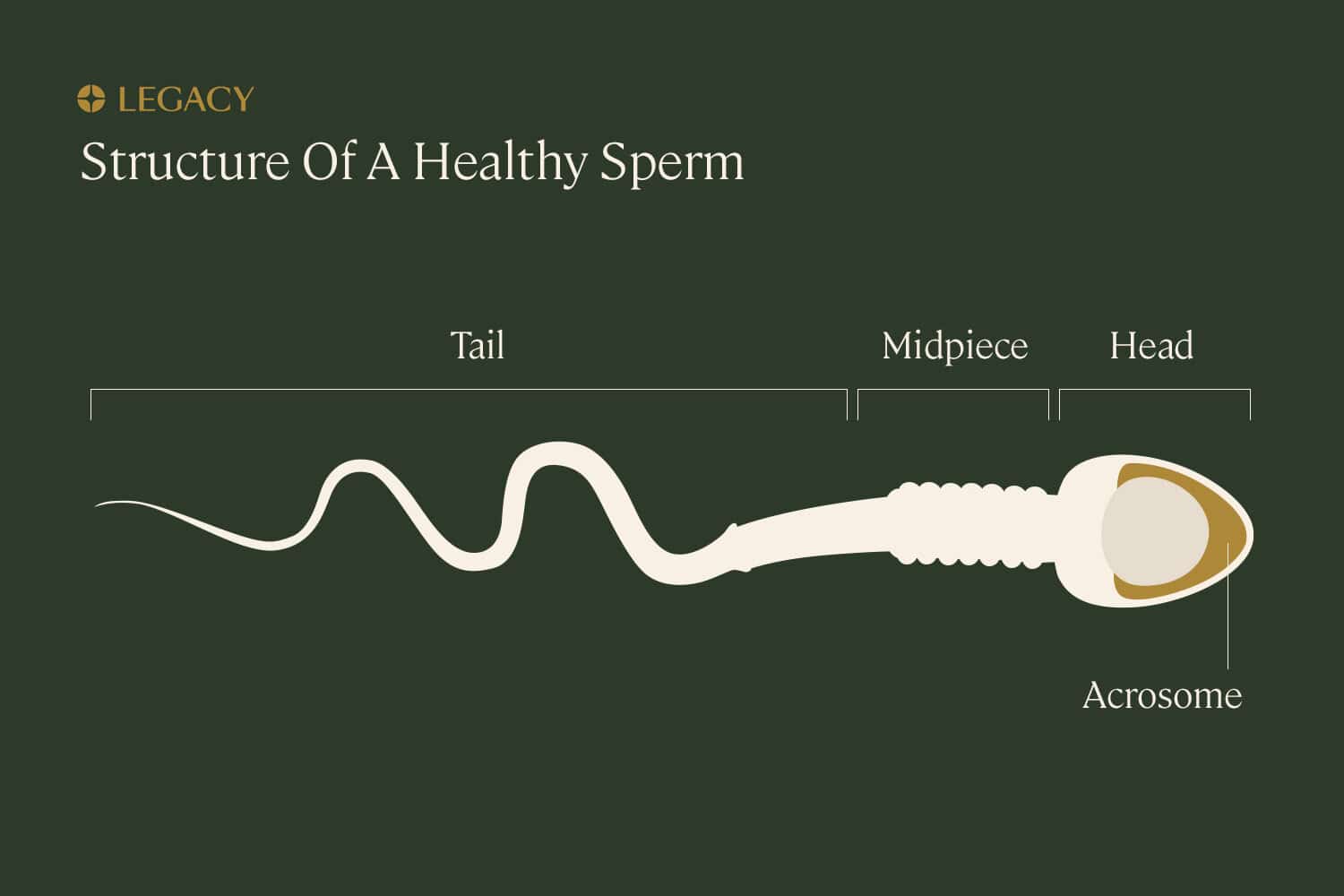 What is sperm made of?

The head of the sperm is composed of a membrane, made of fatty acids, that houses the nucleus (full of genetic material) as well as cytoplasm, the salt/water/protein fluid that fills cells. Additionally, at the tip of the head is the acrosome, a structure that’s bound to the sperm membrane in its own fatty acid layer and contains enzymes that allow the sperm to “digest” the outer layer of the egg for fertilization.

The midpiece or “neck” of a sperm contains mitochondria which generate the energy for the sperm’s activity, including the movement of its tail. The tail is made of protein fibers that contract to propel the sperm through the seminal fluid.

How do sperm move?

It was long believed that sperm moved forward thanks to a back-and-forth “snakelike” lashing movement of their tail. However, a recent study suggests that the tail of a sperm actually only flagellates on one side, propelling them forward in a rotating “corkscrew” pattern instead. Video source: Gadêlha et al, 2020.

That really depends on your definition of “alive.” Sperm cells have some characteristics of living organisms: they metabolize sugars to produce energy, they grow (mature), and they move on their own. However, they contain only half the genetic information of a complete cell; therefore, they can’t reproduce on their own.

Sperm have a limited “life span.” It takes approximately 70–90 days to produce and mature sperm in the testicles. If ejaculated into the female reproductive system, they live for about 5 days. Outside the human body, sperm live a few seconds to a few hours, depending on the surface and temperature/humidity of the environment. If sperm are not ejaculated, they are eventually broken down and reabsorbed by the body.

How is sperm produced?

Sperm production, called spermatogenesis, begins at puberty, usually around age 12. Once sperm production starts, it will typically continue uninterrupted until death, though discernible defects in sperm quality and quantity increase with age. A healthy male reproductive system will produce around 50–100 million viable sperm each day. The whole process of spermatogenesis, from newly formed sperm to a fully mature one, usually takes around 74 days.

Spermatogenesis takes place in the testes, starting in vessels called “seminiferous tubules.” There, a germ cell (a “diploid” cell with 46 chromosomes) divides three times to produce multiple haploid spermatids (immature sperm). These divisions of the sperm cells create genetic variation. At this point, the sperm cells that have divided are still connected with cytoplasm.

In the next step, the spermatids begin to mature, a process driven by the male hormone testosterone. They form a tail and an acrosome, their DNA becomes more compact, and excess cytoplasm is removed to create individual structures. At this point, sperm are still immotile (unable to move on their own). They are transported via muscle contractions to the epididymis, a coiled tube behind each testicle, where they mature further, gaining the ability to move on their own and fertilize an egg.

Relatively cool temperatures are important for spermatogenesis. That’s why, during puberty, the testicles descend from the body to hang between the legs. This keeps them about 4ºF cooler than the usual body temperature of 98.6ºF.

Where is sperm stored?

Once matured, sperm are stored within the epididymis, in a structure called the “cauda epididymis.” During ejaculation, they move via muscle contractions from this storage vessel to the vas deferens, which connects to the seminal vesicles, where seminal fluid is produced. Here, sperm mixes into the semen before moving to the urethra for ejaculation.

How do sperm fertilize an egg?

Fertilization is a “race to the top” of the female reproductive system—from the vagina to the fallopian tubes, where sperm meet the egg and fertilization occurs. On average, anywhere between 80 and 300 million sperm cells are released per ejaculation. However, most are eliminated along the way; any abnormal or otherwise defective sperm fall to the many dangers of the journey, along with a good percentage of healthy sperm. In fact, less than 1 in a million from the original ejaculate will reach the egg at the time of fertilization.

The journey to the egg is complex, full of obstacles, and at times hostile. The acidic environment of the vagina will eliminate any sperm that linger for too long. Once sperm reach the cervix, they must navigate through a web of mucus that can trap many. A great deal of sperm can be lost to “crypts,” side-channels where they can survive for several days. Once they reach the Fallopian tubes, many become bound to its surface; only a select few are freed and continue on to the egg—that is, if they’ve chosen the correct tube. It is hypothesized that this long, arduous journey is nature’s way of weeding out the weak, so only the healthiest, strongest sperm survive.

When a sperm reaches the upper part of the female reproductive system, it undergoes the final steps that allow it to fertilize the egg: chemical changes to the surface of the sperm allow the acrosome to access the egg and dissolve its outer layer, and the tail begins to “beat” faster to facilitate egg penetration. Finally, once a sperm reaches the cytoplasm of the egg cell, it releases its nucleus to combine with the egg’s. Immediately, the external layer of the egg—known as the zona pellucida—changes to become impermeable to additional sperm.

What is sperm quality and how is it determined?

Sperm quality is assessed through three main parameters: motility, morphology, and genetic health. In addition to quality, the quantity (count or concentration) of sperm is important for fertility, because so many sperm are lost during the journey through the female reproductive system. Learn more about sperm quality.

Sperm quality and quantity can both be determined via sperm testing, such as a semen analysis and/or a DNA fragmentation analysis. Learn more in our Guide to Sperm Testing.