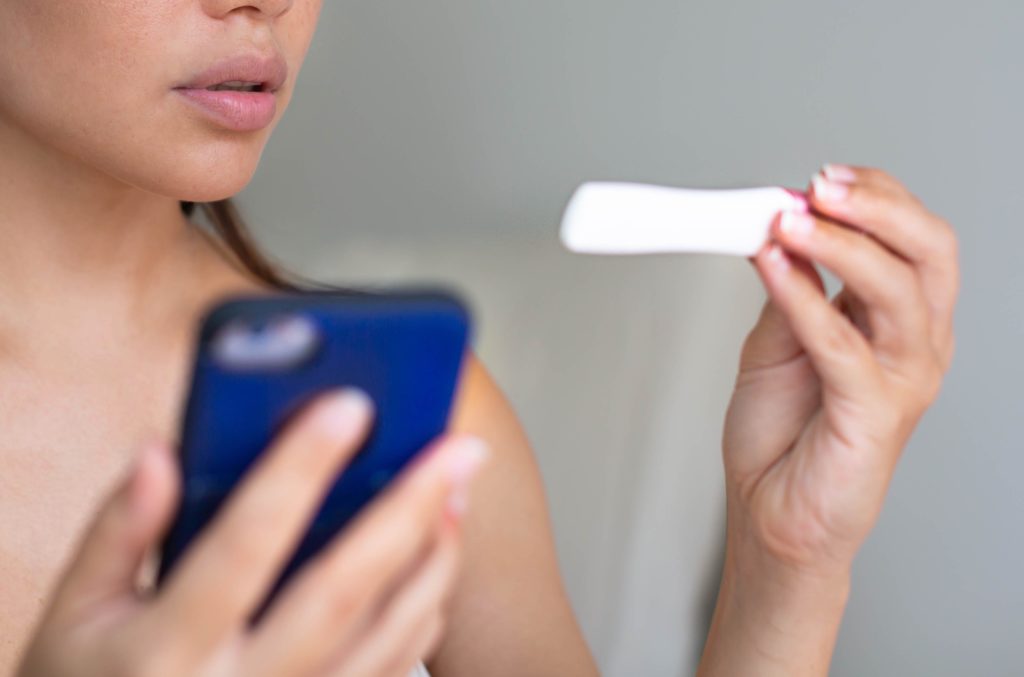 How long should it take to get pregnant?

How long should it take to get pregnant?

The research also shows that the longer a couple has to try to conceive, the smaller the chance of natural conception. If a couple has been trying to conceive for more than three years, for example, the chances of natural pregnancy are about 1–3% each cycle.​ (One “cycle” refers to an ovulation cycle, or the time between menstrual periods. Typically this lasts about a month, around 24–32 days.)

Despite the high conception rate at the 2-year mark, infertility is typically investigated after a year to rule out the factors that may be hindering pregnancy. These include age, medical conditions, low sperm count, and other factors.

The time it takes to get pregnant can vary from couple to couple, depending on multiple factors. Here is a brief overview of the most common contributors to infertility and subfertility when trying to conceive:

How age affects time to pregnancy

Both maternal and paternal age can affect how long it takes to conceive. Sperm health and egg quality both decrease with age.

According to the CDC, most men experience significant age-related fertility decline after they reach the age of 40, while other studies show that the decline of male fertility actually begins around age 35. Similarly, according to the American College of Obstetricians and Gynecologists (ACOG), a woman’s peak reproductive years are between the late teens and late 20s. By age 30, fertility starts to decline and this decline becomes more rapid by her mid-30s.

According to a 2011 review, problems with male-factor fertility may be at least partially attributed to age-related changes in semen quality. These changes include:

There is also a connection between increased age and a decline in sexual function as the probability of having severe ED increases threefold between ages 40 to 70.

A semen analysis is among the best ways to diagnose male fertility issues.

Unlike people with testes, who continue to produce sperm throughout their lives, people with ovaries are born with all the eggs they’ll ever have. The quantity as well as the quality of these eggs decrease with age. Each month that a healthy, fertile 30-year-old tries to conceive, she has a 20% chance of success. By age 40, her chance is less than 5% per cycle. The average age for menopause is 51, but many people are unable to have a successful pregnancy sometime in their mid-40s due to poor egg quality.

How your medical history affects time to pregnancy

There are a number of medical issues that can affect time to pregnancy when trying to conceive. This is why a careful exploration of medical history, as well as a physical, should be conducted for each partner as part of a fertility consultation.

In males, some of the most common medical issues include:

Some other medical issues that may contribute to subfertility or infertility for people with sperm include genetic disorders, physical injuries to the testicles, exposure to chemotherapy and radiation, and physical blockages to the sperm delivery routes.

In females, some of the most common medical issues include:

A number of hormones in the brain, ovaries, testes, thyroid, and adrenal glands all participate in coordinating fertility. When there are imbalances in hormone levels, it can be more difficult to become pregnant.

For males, imbalances to testosterone, FSH, and LH can contribute to male-factor infertility. While a testosterone deficiency may not affect sperm health, it can cause low sex drive or erectile dysfunction, leading some to turn to testosterone replacement therapy. The problem is that this type of therapy does impair sperm production by ​​decreasing follicle-stimulating hormone (FSH), an essential hormone for stimulating sperm production.

Luteinizing hormone (LH) drives the production of testosterone in the testes, so a deficiency in LH can create a deficiency in testosterone, potentially impacting sex drive as well as male fertility. But higher isn’t always better. LH or FSH levels that are too high could indicate testicular failure or damage, which can also impair male fertility.

Learn more about hormone testing for male fertility and how a semen analysis can help.

In females, imbalances to estrogen, progesterone, and prolactin can affect chances of conceiving. Imbalances in these hormones may signal the arrival of menopause or another reproductive issue like fibroids, endometriosis, or polycystic ovary syndrome.

Polycystic ovary syndrome (PCOS) is a common hormonal disorder in which women have infrequent or prolonged menstrual periods or excess male hormone (androgen) levels. Their ovaries may fail to regularly release eggs, leading to impaired fertility and a lower chance of getting pregnant naturally each month.

Individuals who are having trouble conceiving should consider hormonal testing to determine whether abnormally high or low levels may be at fault. Legacy’s comprehensive semen analysis examines sperm parameters to identify any conditions that may hinder conception.

How lifestyle factors affect your chances when trying to conceive

For both partners, some lifestyle factors can affect fertility, and increase how long it takes to get pregnant.

Smoking and obesity can impact male fertility, female fertility, and even IVF success. According to the FDA, smoking negatively affects hormone production, harms the reproductive organs, causes damage to DNA in the sperm, and makes it more difficult when trying to conceive. The American Society for Reproductive Medicine estimates that smokers are twice as likely to experience infertility, compared to non-smokers.

According to Penn Medicine, obesity accounts for 6% of fertility struggles in women. Obesity can change the way the body stores sex hormones. Obese men are also more likely to have low or nonexistent sperm counts due to increased scrotal temperatures and hormonal imbalances.

For males, other lifestyle factors that can affect male fertility include following an unhealthy diet, leading a sedentary lifestyle, skimping on sleep, and drinking too much.

When is the best time to try to conceive?

The best time to try to conceive is during the fertile window, the five days leading up to ovulation. If the female partner has consistent periods, ovulation takes place about 14 days before the start of the next menstrual period. Some common signs and symptoms of ovulation include a change in vaginal secretions (clearer, wetter, and stretchier), a change in basal body temperature, and a surge of luteinizing hormone that can be detected on at-home ovulation predictor strips.

During this fertile window, having frequent sex is more likely to result in pregnancy. The Mayo Clinic reports that the highest pregnancy rates occur in couples who have sex every day or every other day near the time of ovulation.

Tips for trying to conceive

Consider the following tips when trying to conceive to increase your likelihood of getting pregnant:

Most men do not choose to test sperm until they’ve been trying to conceive for 6–12 months or more. But many sperm quality issues can be easily addressed to increase your chances of conceiving. Testing sperm quality early can shorten the time to pregnancy and help to avoid costly and unnecessary tests or treatments down the line. A semen analysis helps uncover issues when trying to conceive.

There are numerous apps and over-the-counter testing kits to help you keep track of the menstrual cycle and time the ovulation window to plan sexual intercourse at the best time of the month.

Try to conceive during your fertile window

Timing your sexual intercourse to align with the fertile window can significantly increase chances of pregnancy when trying to conceive. Have sex frequently in the five days leading up to ovulation. Ovulation typically occurs 14 days before the start of the next menstrual period, and can be pinpointed using at-home ovulation prediction tools.

Improve your diet and lifestyle

Following a diet high in fish, lean poultry, fruits and vegetables, legumes, and whole grains has been shown to improve sperm health, including sperm motility. Other habits to improve fertility chances include exercising regularly, getting adequate sleep, and cutting back on alcohol and smoking. Conducting a semen analysis before and after lifestyle changes can be a great way to monitor crucial male fertility factors.

Taking supplements is another way to support fertility health. Vitamins and minerals like CoQ10, vitamin C, vitamin D, zinc, selenium, and others have been shown to improve sperm production and male hormone health.

How common is infertility?

When should we see an infertility specialist?

You may want to see an infertility specialist, also known as a reproductive endocrinologist, if you are a heterosexual, cisgender couple who has been actively trying to conceive for 12 months without success (or 6 months if over the age of 35).

This doesn’t mean you’ll necessarily be diagnosed with infertility, or that you’ll immediately be pushed to do IVF. It just means that a doctor will help assess the factors that might be preventing you from getting pregnant on your own, and suggest changes or treatment that can improve your chances when trying to conceive.

Some people may want to see a reproductive endocrinologist earlier in the process of trying to conceive. This includes:

You may want to see a male fertility specialist, or a urologist, if:

Some couples with male-factor fertility issues see both a urologist and a reproductive endocrinologist, who work in tandem to help the couple get pregnant. Many IVF clinics even have one or more urologists on staff.

When trying to conceive, take the guesswork out of the picture by testing sperm parameters with a clinic-grade semen analysis to rule out any issues that may be getting in the way.

Legacy’s at-home semen analysis kits allow you to test your sperm from the comfort and privacy of your own home and receive data on crucial sperm parameters like sperm concentration, motility, and morphology. Send your sample to a CLIA-certified lab to be thoroughly reviewed by a team of experienced scientists — all results are reviewed by our medical staff. Samples can be stored for later use in case you are not ready to start a family but want to preserve the sperm you have now.

While everyone’s journey to starting a family is unique, finding out what obstacles you may face along the way will help make the process smoother for all, making a semen analysis a great choice before trying to conceive.