You’ve tried it all—you stopped drinking as much, your bedtime is finally reasonable, and your diet looks like something straight out of Dr. Oz’s cookbook. You even restarted your gym membership and managed to drag yourself there on the regular.

Ashwagandha increases serum levels of beneficial hormones such as testosterone. Three months of supplementation increased sperm counts by 167%, motility by 57%, and semen volume by 53%.

Also known as Indian ginseng, ashwagandha is an adaptogen, a plant known to help the body resist stress and promote healing; it’s been linked to a number of health benefits, especially related to anxiety. However, one of its most prominent benefits is its effect on testosterone. Ashwagandha can significantly increase testosterone levels, possibly by increasing the activity of natural endogenous antioxidants. This makes it useful as a male fertility supplement.

One study demonstrated that supplementation with ashwagandha increased seminal concentrations of testosterone, LH, and FSH. Both LH and FSH are important in stimulating the testes to produce testosterone and sperm. Another study showed that consuming 675mg of ashwagandha a day for three months improved both semen parameters and serum levels of beneficial hormones. Sperm count improved by 167%, semen volume by 53%, and sperm motility by 57%. Both testosterone and LH levels were also elevated after 90 days. 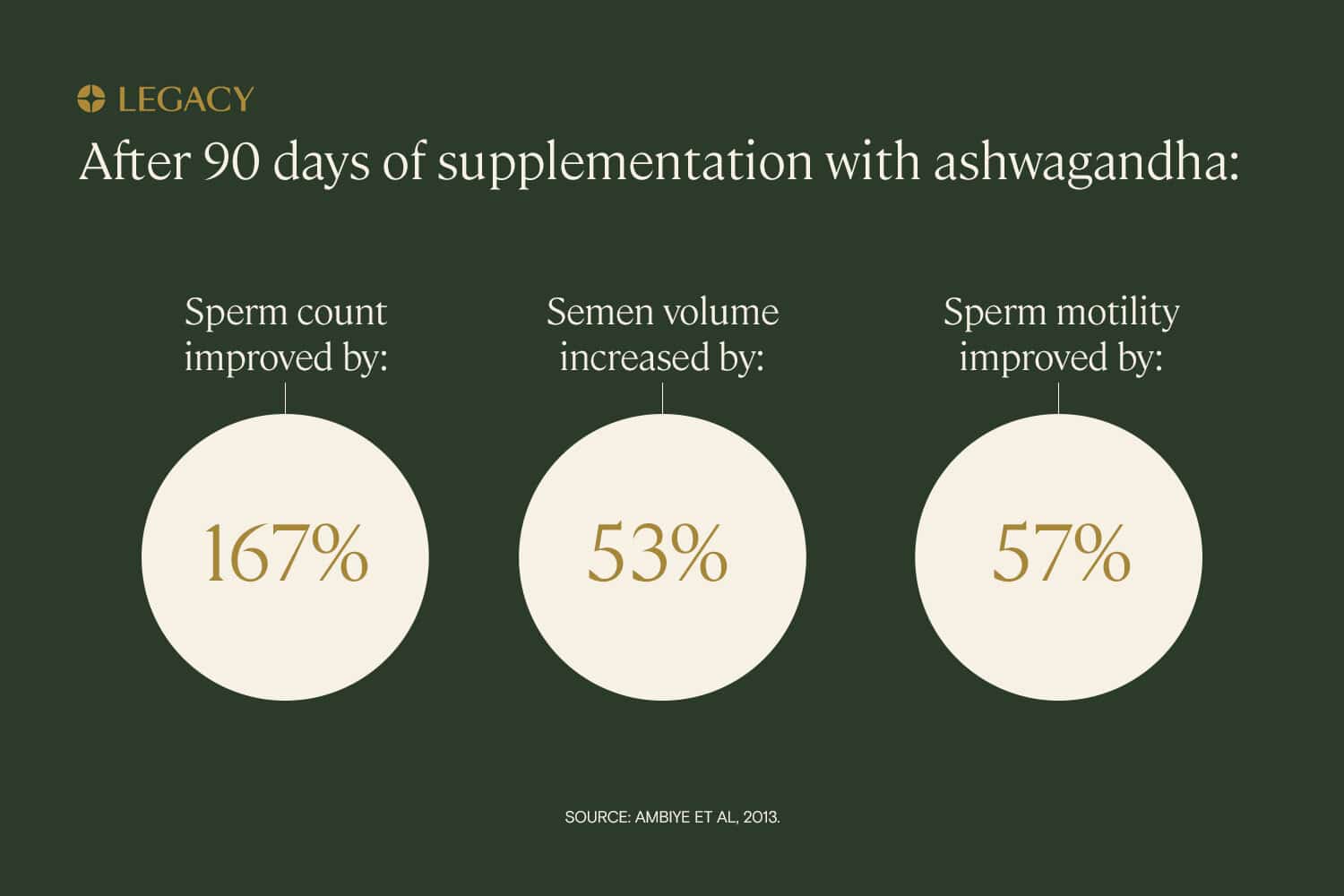 A critical nutrient in our metabolism, CoQ10 can have additional benefits as a male fertility supplement. Increases in sperm concentration, motility, and fertilization rates have all been described after several weeks of supplementation.

Coenzyme Q10 plays a key role in the body. It is essential for our metabolism to function, and also acts as a very strong antioxidant. It’s often used to treat cardiac conditions, and has been researched for its effects on cancer, Parkinson’s disease, and migraines, among many others.

Many energy-dependent processes in sperm cells also rely on the availability of CoQ10. Additionally, sperm are extremely sensitive to the effects of free radicals (harmful byproducts of body metabolism), and anywhere from 30–80% of male infertility cases may be due to oxidative stress. CoQ10, as a potent antioxidant and facilitator for metabolism, is effective for improving sperm parameters.

As early as 1997, researchers tested the effects of CoQ10 on infertile men and found a significant increase in motility and fertilization rates. A more recent review examined three different studies and found that sperm concentration and motility were significantly increased after several weeks of CoQ10 supplementation. A typical daily dose is between 100 and 200mg.

Not to be confused with aspartic acid, D-aspartic acid is an amino acid that’s concentrated in some body tissues and cells, such as testicles and sperm cells. Although there’s no definitive consensus on the issue, some studies suggest that D-AA may be used as a male fertility supplement.

Researchers noticed that levels of D-AA in semen were much lower in infertile men than in healthy controls. This is likely due to D-AA’s effect on testosterone levels; it seems to have a role in regulating the release and synthesis of testosterone, which can have powerful effects on reproductive health. In fact, one study showed that supplementing with D-AA for 90 days significantly increased the concentration and motility of sperm, nearly doubling concentration and boosting motility by over 50%. Ultimately, this led to an improvement in the rate of pregnancies in their partners.

Fenugreek improves free testosterone levels, with increases of up to 46% after three months of supplementation. This benefits sperm parameters such as count and morphology, and boosts libido.

This herb, often found in your kitchen, has potent medicinal properties, and can be found in many male fertility supplements. Extracts derived from fenugreek seeds have been shown to have significant effects on hormone regulation and reproductive health.

One study examined the effects of Furosap, made from fenugreek seeds, on testosterone levels and sperm profile. Supplementation of 500mg per day for 12 weeks showed a 46% increase in free testosterone levels, as well as benefits on sperm count and morphology. Another study aimed to evaluate Testofen, another extract of fenugreek, on improving sexual function in healthy aging males. They found that after supplementation with 600mg for 12 weeks, serum and free testosterone were higher and sexual function improved with an increase in libido.

Folate plays a critical role in reproductive health, as it is used in the creation, maturation, and development of sperm. Boosting folate levels may significantly increase sperm concentration.

Folate, a type of B-vitamin, is critical in a huge range of bodily processes, such as converting carbohydrates into energy, making red and white blood cells, and producing DNA and RNA. You may associate folate with pregnancy, as it is essential in the development of the baby’s brain and nervous system. However, it’s also incredibly important as a male fertility supplement, as it plays a role in the creation and maturation of sperm.

Supplementing with high doses of folate may be beneficial for sperm health. A 2017 review analyzing seven studies found that folate supplementation was associated with increased sperm concentrations in men with fertility issues. This effect was even stronger when combined with zinc, and patients who received both nutrients had improved normal morphology as well.

A natural aphrodisiac, maca root powder may also be beneficial as a male fertility supplement, increasing both sperm concentration and motility after 12 weeks of supplementation.


This plant, native to Peru, has a long history of culinary and medicinal use—it has traditionally been consumed for its high nutrition content and its ability to enhance libido. However, it may also be great for sperm health. One study gave men 1.75g of maca for 12 weeks to observe its effects on fertility. They found that both sperm concentration and motility were increased gradually throughout the treatment period, without any significant change in serum hormone levels.

Omega-3 fatty acids have been found to improve measures of fertility. Supplementation for 32 weeks leads to a significant improvement in sperm concentration, total count, and motility, as well as protective antioxidant effects.

Omega 3s are more than just male fertility supplements—these fatty acids have been shown to have a myriad of health benefits, including everything from easing depression to controlling asthma. Found primarily in fish, omega-3s (especially EPA and DHA) are crucial for proper body functioning. When it comes to male reproductive health, omega-3s are essential in enhancing antioxidant activity in seminal fluid, as well as serving as important structural components of cell membranes.

One 2010 study explored the relationship between both omega-3 and omega-6 fatty acids and idiopathic (unexplained) male infertility. They found that infertile men generally had a higher ratio of omega-6s compared to omega-3s, and that lower levels of omega-3s correlated with decreased sperm quality. Another study demonstrated that supplementing with omega-3s for 32 weeks led to a dramatic improvement in sperm concentration.

A recent systematic review of omega-3 fatty acids as a male fertility supplement examined three studies that treated infertile men with EPA and DHA and observed their effects on semen parameters. They found that supplementation with omega-3s increased sperm motility significantly, and that higher levels of DHA in seminal plasma contributed to a protective effect for the sperm. 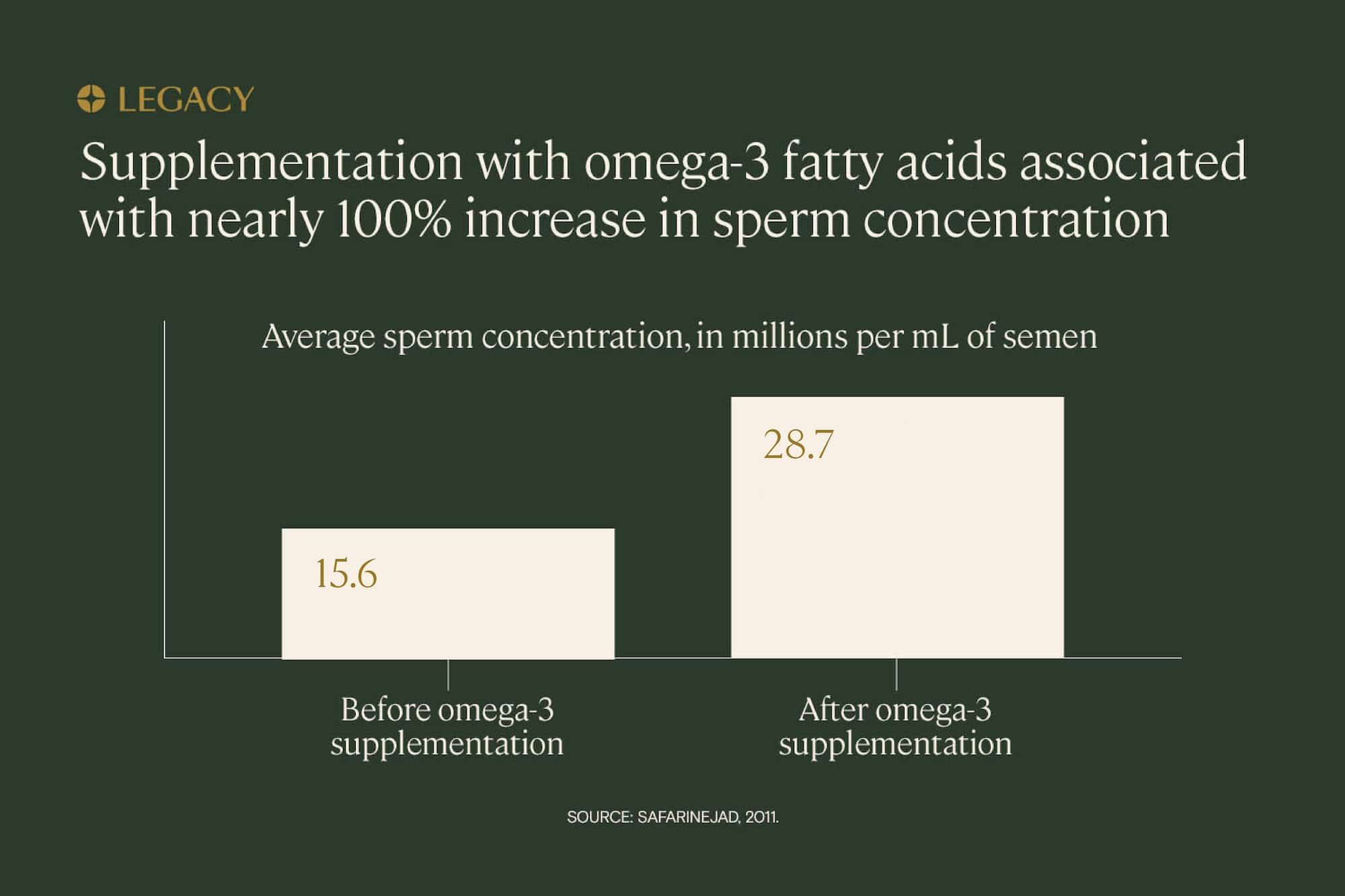 Selenium has long been a staple in male fertility supplements, and for good reason. There’s solid evidence that selenium—alone or in combination with vitamins C and E—may improve sperm count, motility, and morphology.

Selenium is an important trace mineral, a term that means you only need a very small amount, with antioxidant properties. This nutrient plays a key role in metabolism as well as reproductive health. Many older studies have looked at combination therapies for infertility, such as selenium and vitamin E, A, or C, and found benefits to fertility.

But a recent study aimed to evaluate selenium supplementation as a standalone therapy. Infertile men were prescribed 50μg (micrograms, not milligrams) of selenium once a day for three months; researchers found that sperm count, motility, vitality, and normal morphology were all noticeably increased after treatment. Additionally, they found higher levels of testosterone and glutathione, a powerful antioxidant, both of which could also benefit fertility.

Tribulus terrestris can enhance libido and has beneficial effects on semen parameters such as count, motility, and morphology.

Also known as puncturevine, tribulus terrestris has long been used as an aphrodisiac, a substance that stimulates sexual desire. While this on its own may enhance the chances of conceiving, puncturevine may also function as a male fertility supplement that improves sperm health and enhances the effects of testosterone.

One review looked at seven different clinical studies, concluding that consumption of tribulus terrestris was effective at improving the number, motility, and morphology of sperm samples from men with infertility.

A powerful antioxidant, vitamin C may protect sperm from damage. Supplementation for two months was associated with significant benefits for fertility: sperm count doubled, motility increased by 90%, and normal morphology increased by 50%.

Reactive oxygen species (ROS), or “free radicals,” are byproducts of normal metabolism, produced constantly within the body. While in healthy individuals, ROS levels are naturally kept low, unhealthy lifestyle choices, diseases, pollutants, and other stressors can lead to high levels of ROS. When ROS levels get too high, the body is placed in a state called oxidative stress, which can promote inflammation, injury, higher risk of chronic disease, and damage to sperm.

Vitamin C’s antioxidant effect can counteract the impact of ROS on the body, potentially improving sperm health. One study found that taking 1,000mg supplements twice a day for two months was associated with doubled sperm counts, as well as motility increased by over 90%; sperm with normal morphology increased by 50%. Another study found that men with infertility who were assigned 250mg of vitamin C twice daily for three months had significantly better normal motility and morphology values than the control group. 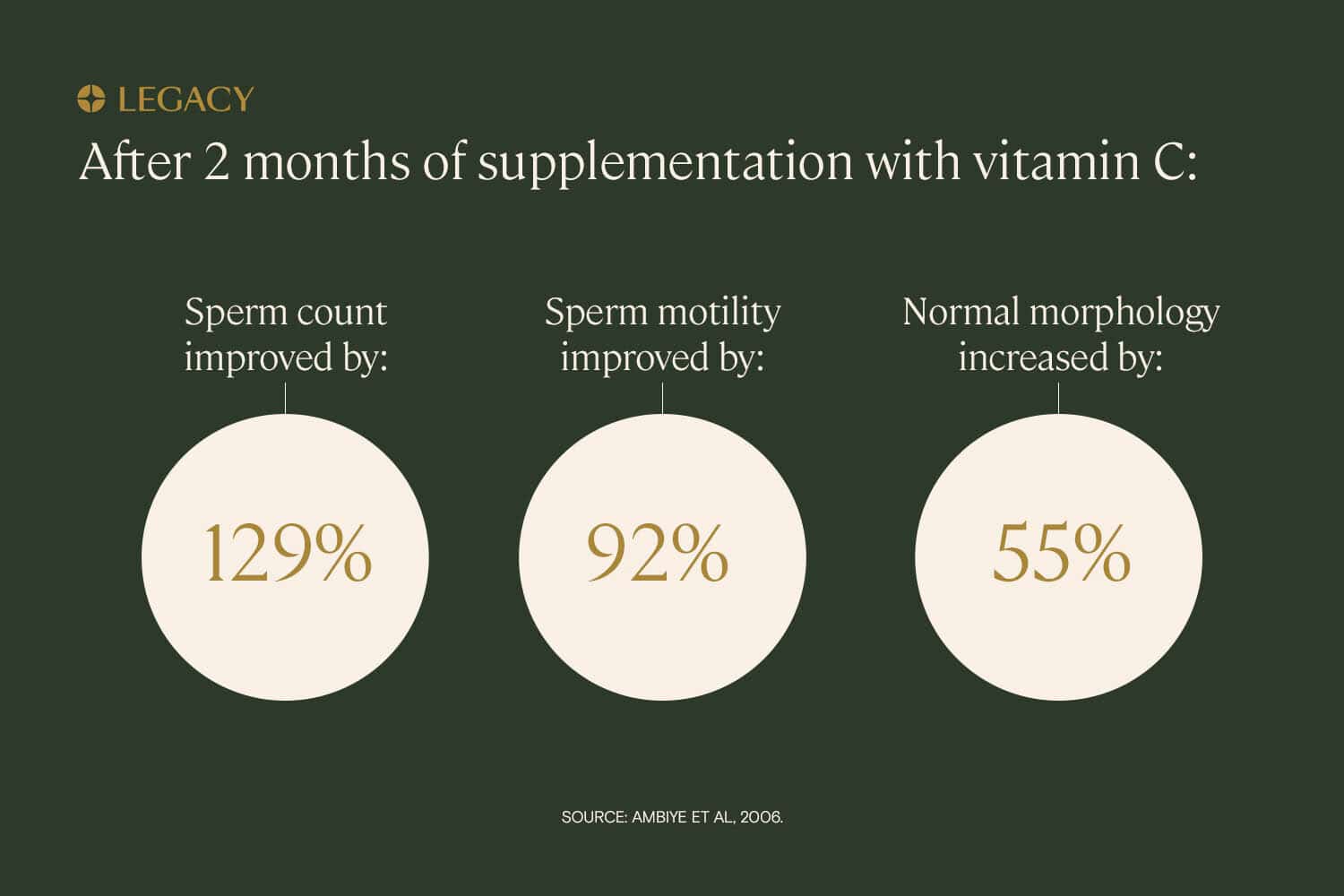 Similar to vitamin C, vitamin E is an antioxidant that protects sperm from free radical damage. Typically combined with other supplements, this vitamin is associated with improved sperm motility, morphology, and genetic health.

Another essential nutrient, vitamin E acts as a powerful antioxidant that can decrease oxidative stress in much the same way that vitamin C does. Although this vitamin is likely to have beneficial effects on reproductive health on its own, most studies examining the role of vitamin E as a male fertility supplement have combined supplementation with other antioxidants such as selenium or CoQ10.

One such study found that after taking 400mg of vitamin E and 225ug of selenium for three months, levels of MDA (malondialdehyde)—a marker for oxidative stress—were greatly reduced in seminal plasma. Another review examined the evidence for antioxidant supplements for sperm health. Researchers concluded that taking a combination of vitamin E and vitamin C was extremely effective in reducing sperm DNA fragmentation (damage).

Zinc is a critical player in male reproductive health. Zinc supplementation is associated with increases in sperm volume, motility, and normal morphology.

Commonly described as one of the most essential elements for male fertility, zinc is involved in a number of critical reproductive processes, such as spermatogenesis (sperm production), sperm stability, and testosterone release. Deficiencies in zinc may impede spermatogenesis, negatively impacts testosterone levels, and can give rise to a number of sperm abnormalities.

It has been repeatedly shown that zinc concentrations in seminal plasma from infertile males is significantly lower than those from normal controls. Furthermore, zinc supplementation has been associated with a significant increase in semen volume, sperm motility, and normal sperm morphology.

The market for supplements is large and can be overwhelming. The products below come from trusted partners, contain high-quality ingredients, and are backed by solid science. 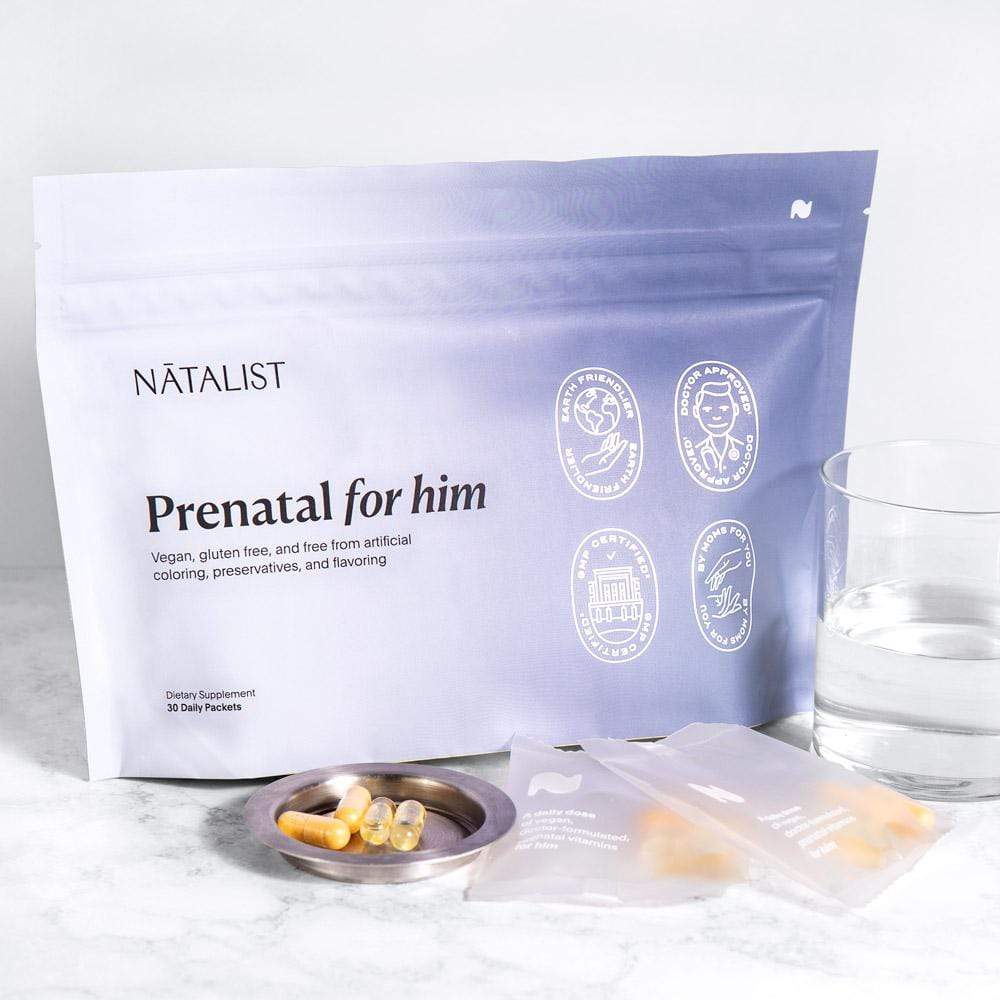 Natalist's Prenatal for Him

Developed by a urologist and male fertility nutrition specialist, Natalist’s prenatal supplement for him is a high-quality, antioxidant-rich multivitamin formulated for male fertility. Because fertility outcomes rely on both egg and sperm, our prenatal vitamins for men are specifically designed to address nutrient deficiencies and put you on track for your journey.