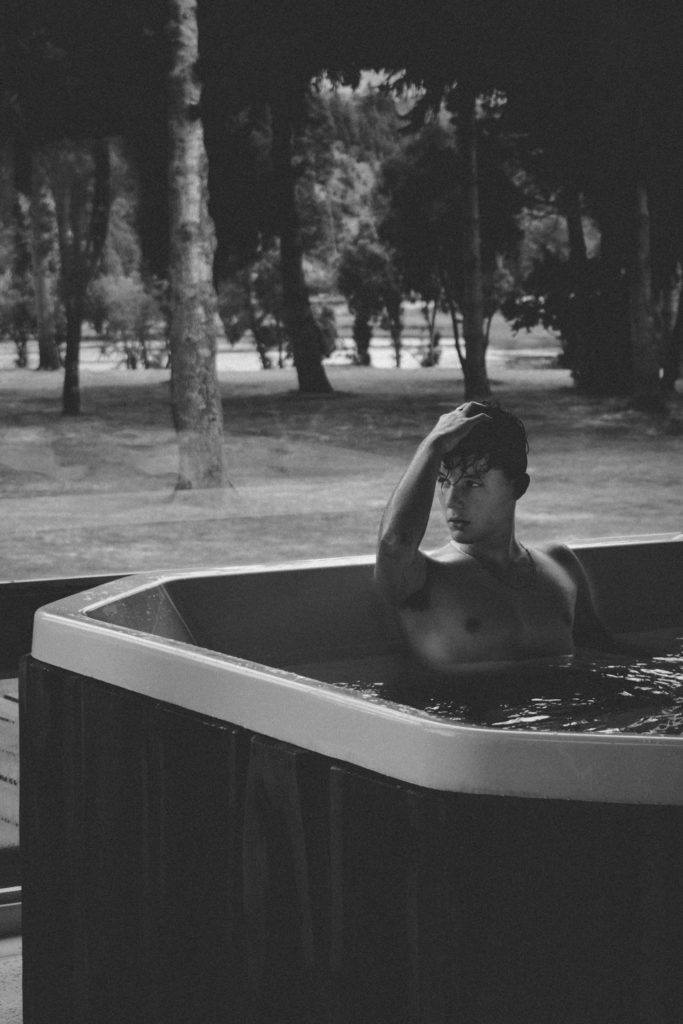 You may know that heat can affect your sperm production and quality. But how much heat does it take to negatively impact your sperm, and do common activities that involve heat harm your fertility? We’ll look into whether hot tubs and saunas are bad for fertility and if the effects can be reversed.

How does scrotal temperature affect fertility?

The placement of the scrotum — the sac in which the testes are held — outside of the body helps it maintain the optimal temperature for sperm production, around 2–8 degrees Celsius below body temperature. However, common activities like bicycling, using a laptop on your lap, or taking a hot bath can raise the scrotal temperature, placing “heat stress” on the testes.

This heat stress negatively impacts sperm production, and could therefore harm fertility. The effects include reduced sperm concentration and motility (movement), and a decreased number of standard-shaped sperm (known as morphology).

A small study in humans found that even a mild increase in testis temperature led to a lower sperm count after several weeks. The warmer temperature also significantly increased sperm aneuploidies (an abnormal number of chromosomes carried by sperm). About 6 months after the heat exposure ended, sperm had returned to normal. The study suggested that sperm can recover from constant heat exposure, but noted that more research among larger groups is needed. (And it’s important to note that, in this study, scrotal temperature was elevated for around 15 hours per day — much longer than most would be using a sauna or spa.)

Research on infertile males with a varicocele (enlarged veins in the scrotum that can cause increased heat) indicated that higher scrotal temperatures were associated with lower sperm concentration and motility, along with decreased testosterone and follicle-stimulating hormone levels (which are important for sperm production).

The study also suggested that higher scrotal temperatures were associated with oxidative stress, which can contribute to sperm DNA fragmentation (damage to the DNA inside sperm). Oxidative stress is a result of unchecked “free radicals,” or reactive oxygen species, in the cells. Free radicals are unstable molecules produced as natural byproducts of daily life; they can also be increased by toxin exposure, illness, poor lifestyle, and heat stress.

Similarly, a 2016 study in rams found that heat stress may increase reactive oxygen species (ROS), resulting in oxidative stress that can damage sperm. The study found reduced motility and a greater number of defects in sperm from rams that underwent testicular heat stress for 12 days. While these changes could potentially affect fertility temporarily, the sperm recovered after one sperm cycle (approximately 60–70 days).

Research has suggested that using hot tubs and saunas regularly can cause heat stress that negatively impacts sperm.

A 2016 study found that warming the testicles by entering a hot bath for 30 minutes impaired sperm production and led to sperm cell death and sperm DNA damage. Taking a hot bath every day led to more significant damage, compared to every three days. The sperm quality in both groups recovered after several months.

One study examined the effect of using a sauna for 2 weeks, and found that this exposure resulted in impaired sperm movement. Another study from 2013 found that using a sauna twice per week for three months caused scrotal hyperthermia (elevated temperature) that resulted in drops in sperm concentration and motility — by more than 50% — as well as altered sperm DNA. Six months after stopping the use of the sauna, the effects on sperm were reversed. Even so, the study noted that the impact of saunas on fertility may be an important consideration.

Research from 2020 that examined lifestyle factors in 1,311 participants found that regularly using a sauna was linked to lower sperm concentration. It suggested that infertile male patients consider modifying lifestyle choices that are associated with infertility, but also indicated that more research is needed.

And in fact, a study from 1983 suggested that even one 20-minute sauna session may affect sperm. The study found that sperm count decreased within one week after the sauna, returning to normal after five weeks of recovery. While sperm motility rose for a short time following the sauna in this study, there were also higher numbers of immature sperm in the semen, suggesting an impairment of spermatogenesis (sperm production).

Can heat-related decline in sperm quality be reversed?

The majority of studies included above indicate that while heat from hot tubs, saunas, and baths does negatively impact sperm, the effects are usually temporary. Sperm quality typically returns to normal within several months after stopping the exposure to heat.

Infertile men who use hot tubs and baths may see an improvement in their semen parameters if they stop this behavior. One study found that among a small group of infertile men who used a hot tub or bath for at least 30 minutes per week for the preceding three months, nearly half experienced improvements in their semen after they stopped their exposure to heat. Specifically, they saw an average increase of 491% in their total motile sperm counts along with a 22% average increase in sperm motility, improvements that lasted beyond three months.

It’s important to remember that semen parameters are not an exact representation of fertility. Drops in sperm concentration or motility may not impact a person’s ability to conceive.

Research notes that while sperm production may decrease in men who take saunas, using saunas regularly hasn’t been linked to lower fertility. Furthermore, damage to sperm from heat appears to be reversible, though the return to your original sperm parameters may take anywhere from a few weeks to several months.

Taking an occasional hot bath or sauna is unlikely to significantly harm your fertility, especially if you have normal sperm production. However, more research is needed to determine whether saunas have a bigger impact on men who already have impaired sperm production.

While the evidence is still unclear on the overall impact of hot baths, hot tubs, and saunas on fertility, studies largely find short-term effects on sperm production and semen parameters. More research is needed on the long-term impact.

It may be best to avoid hot tubs, baths, saunas, and other forms of heat exposure if you’re trying to conceive. This is especially relevant if you already have any abnormalities in your semen, such as a low sperm count, low motility, or abnormal morphology.

If you experience frequent heat exposure — whether through hot tub and sauna usage or through other recreation or occupation — you may want to complete an at-home sperm analysis to understand your fertility. The analysis can give you data on your sperm quality and help you identify lifestyle changes that may improve your fertility.