The guide will introduce the fundamentals of male fertility: sperm, semen, reproductive anatomy, sexual health, and hormones. It will also review what affects those elements, and what you can do to protect and improve your fertility. 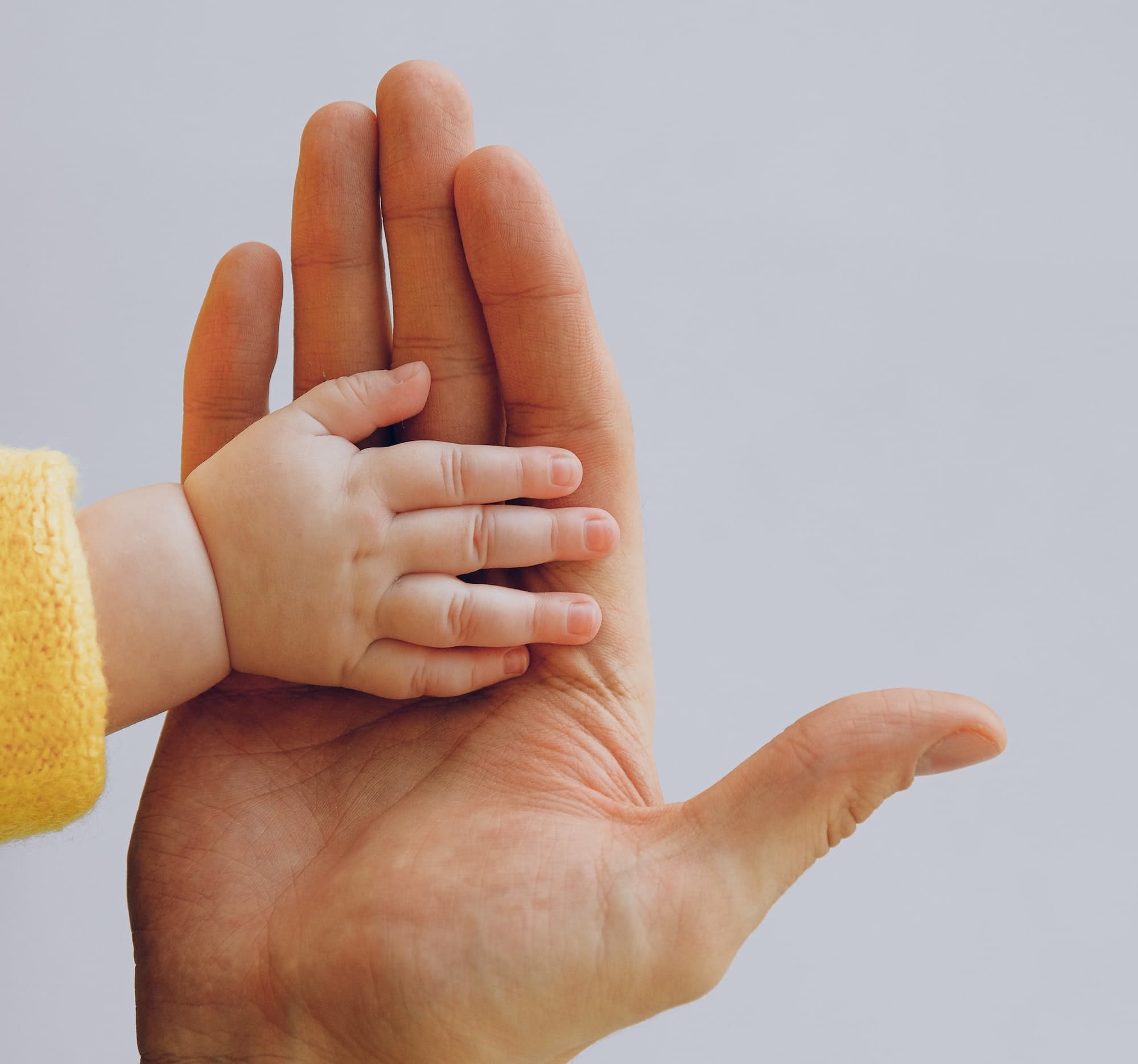 What is male fertility?

In the simplest of terms, male fertility refers to a man’s ability to create a pregnancy through sex with a female partner. “Subfertility” means that conception takes longer than normal, indicating that one or both partners may be less fertile than the ideal. “Infertility” is diagnosed when a couple has been having unprotected sex for 6–12 months (depending on their ages) without a pregnancy. Approximately 30–50% of infertility cases are due to issues with male fertility.

An important note: Being subfertile or even infertile doesn’t mean you’ll never be able to get your partner pregnant. In many cases, lifestyle changes or medical intervention can help improve male fertility and achieve pregnancy. 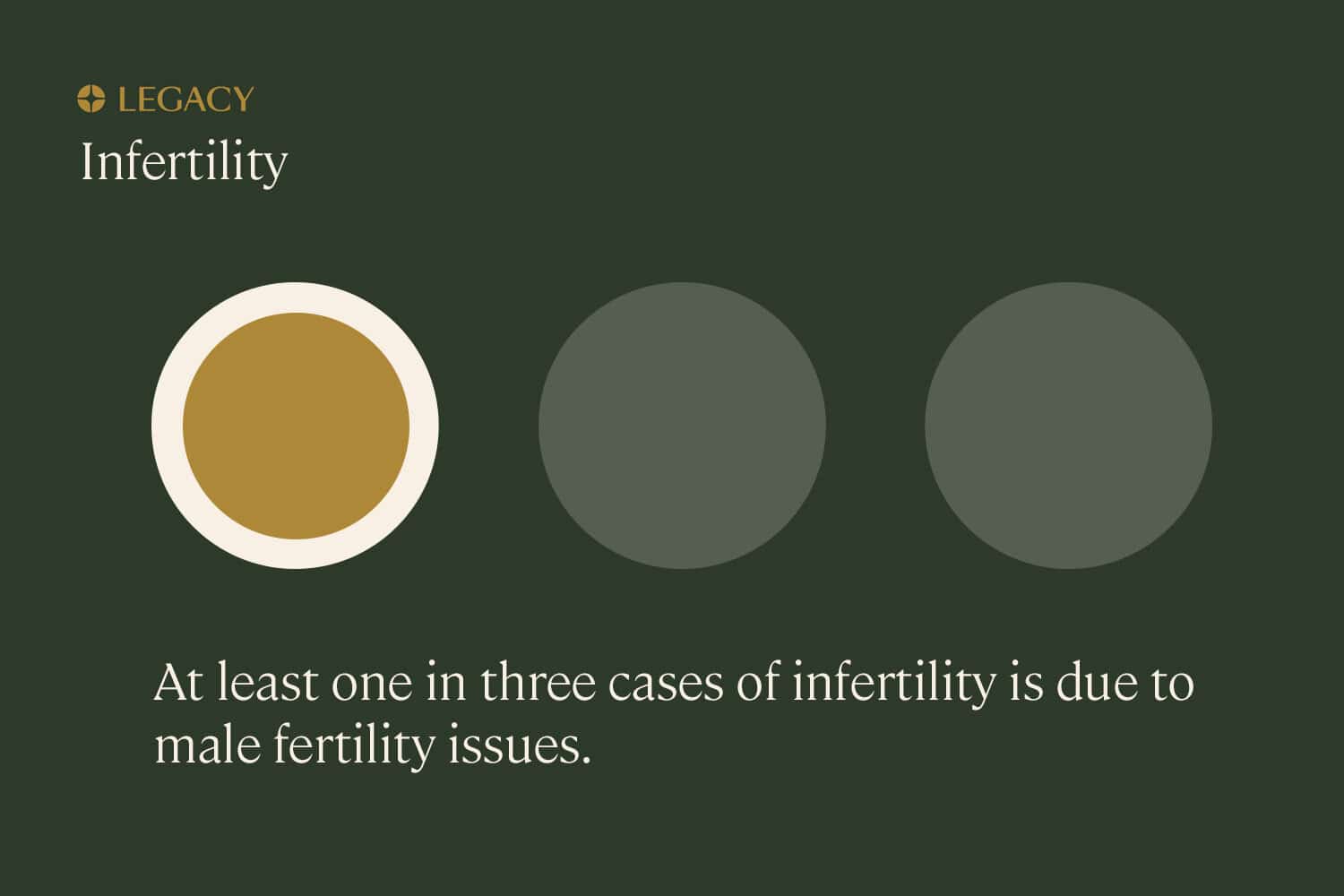 Male fertility relies on a somewhat complex system of hormones, structures, and actions within the male reproductive system. The process is driven by the hormone testosterone, along with follicle-stimulating hormone (FSH) and luteinizing hormone (LH). In order to create a pregnancy, there first needs to be the proper level of these hormones in the body to drive spermatogenesis, the creation of sperm in the testicles. Male fertility depends on the body being able to produce healthy sperm that’s properly shaped and moving efficiently, and being able to create enough of it, since only about 1 in a million makes it to the egg.

Next, the sperm needs to be able to move from the testicles to the epididymis (a duct behind each testicle where the sperm are matured and stored), to the vas deferens (the “tube” that transports sperm out of the epididymis), to the prostate, where it combines with semen, the fluid that carries and fuels sperm. Finally, there needs to be ejaculation, the process by which semen is ejected from the penis and enters the female reproductive system during sex (typically during orgasm).

If any of these functions is impeded, male fertility may be affected.

As stated above, male fertility depends on the production of enough sperm that’s healthy and properly formed. There are three parameters used to measure sperm health (normal values according to the WHO): 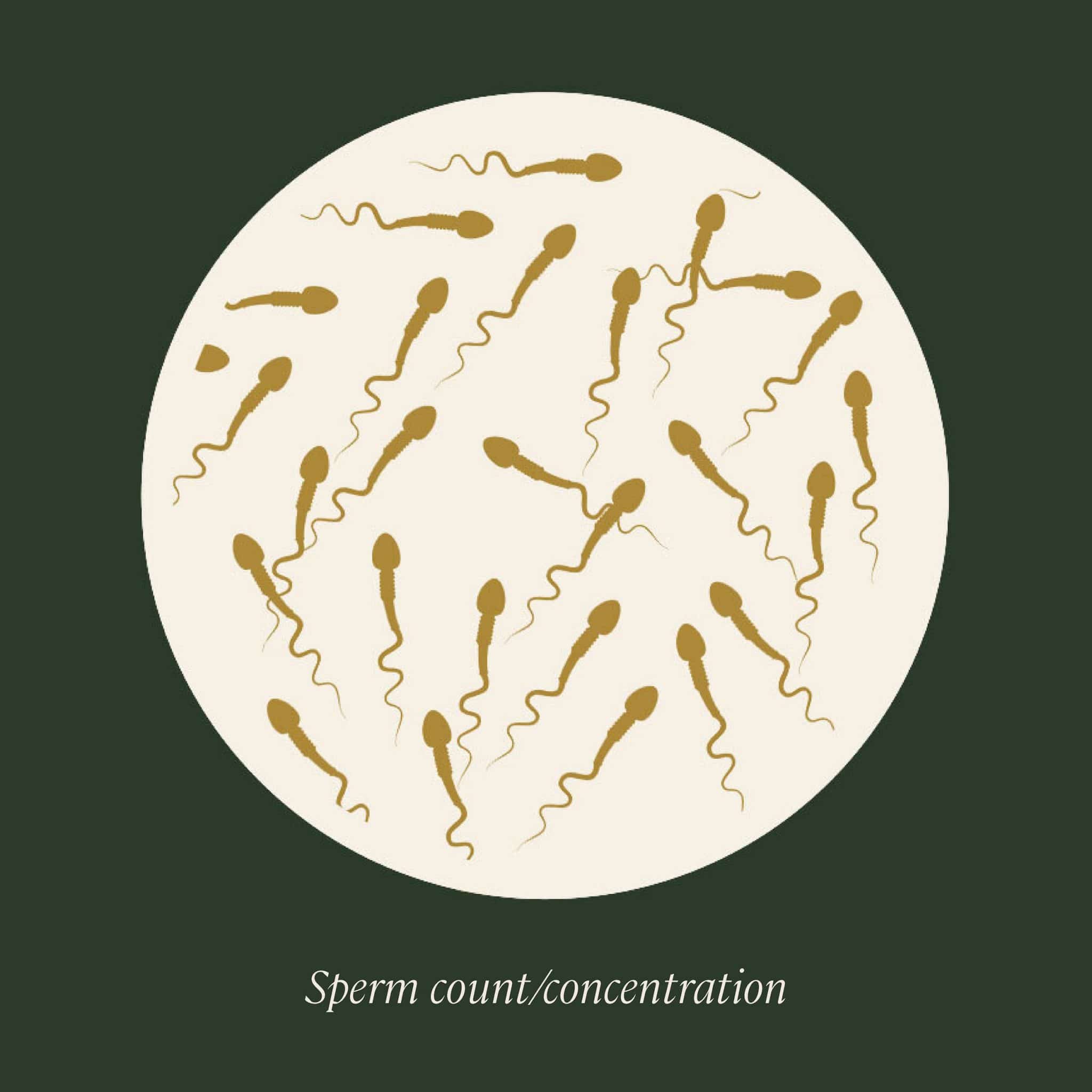 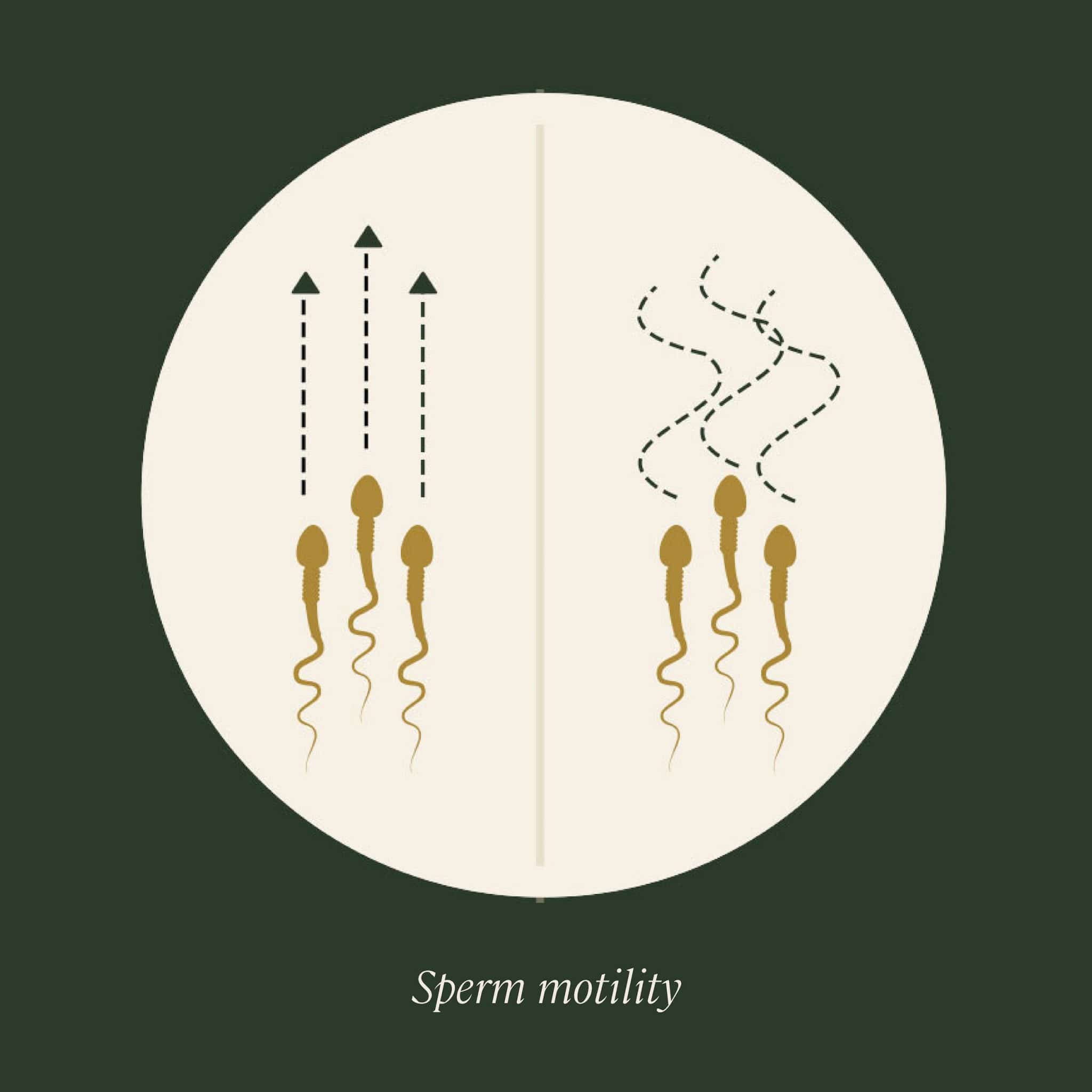 Sperm must be able to travel within the female reproductive system in order to reach and fertilize the egg. This term refers to how many sperm are moving; it’s expressed as a percentage of total sperm. A healthy semen sample has at least 40% motile sperm, and has at least 32% progressive motility—meaning that the sperm are not just moving, but moving in a helpful way (straight lines and large circles). 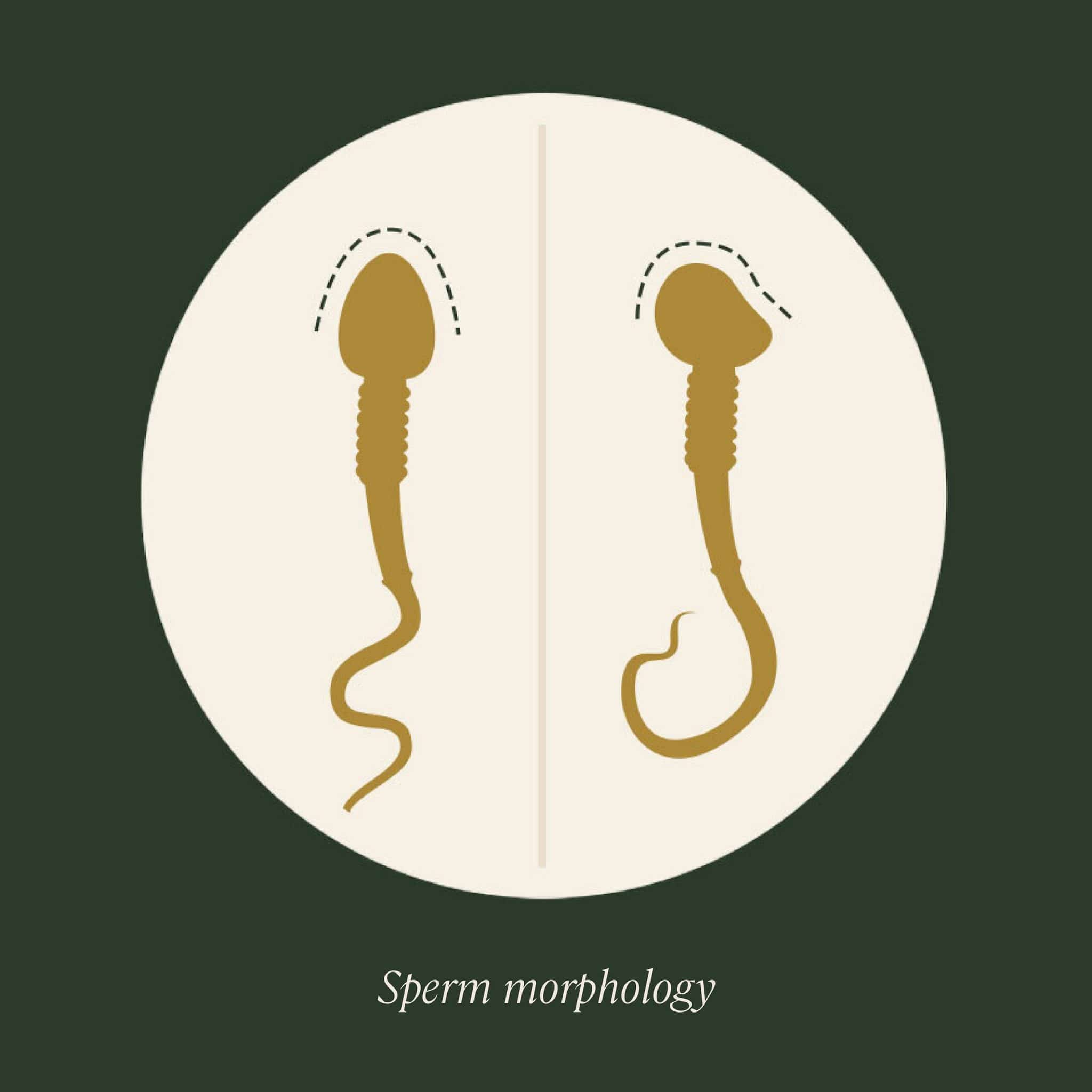 This measurement tells us what percentage of sperm have the proper shape, size, and structure (a smooth oval head with a cap, a midpiece or “neck,” and a long tail). All men will have some abnormal sperm; in fact, morphology measurements as low as 4% are still considered normal.

These three parameters of male fertility are measured in a test known as a “semen analysis,” in which a semen sample is examined by an expert under a microscope. Learn more in our Guide to Sperm Testing or order your at-home sperm testing kit.

The one sperm quality parameter that’s not measured in a typical semen analysis is genetic health. Sperm are “gametes,” male sex cells that exist to carry DNA to the egg. When a sperm combines with the egg, which contains its own genetic material from the mother, they create a unique genetic makeup that drives the development and characteristics of the offspring. So, if the DNA inside the sperm is damaged or abnormal, it’s less likely to be able to fertilize an egg or create a healthy pregnancy.

The presence of abnormal genetic material inside a sperm is called “sperm DNA fragmentation.” The percentage of sperm with fragmented DNA can be measured through a few more complex tests, such as the TUNEL, an alkaline comet test, or a sperm chromatin structure assay (or SCSA). Each of these tests identifies breaks in the DNA inside a sperm cell in a different way, and has different parameters for what’s considered normal. 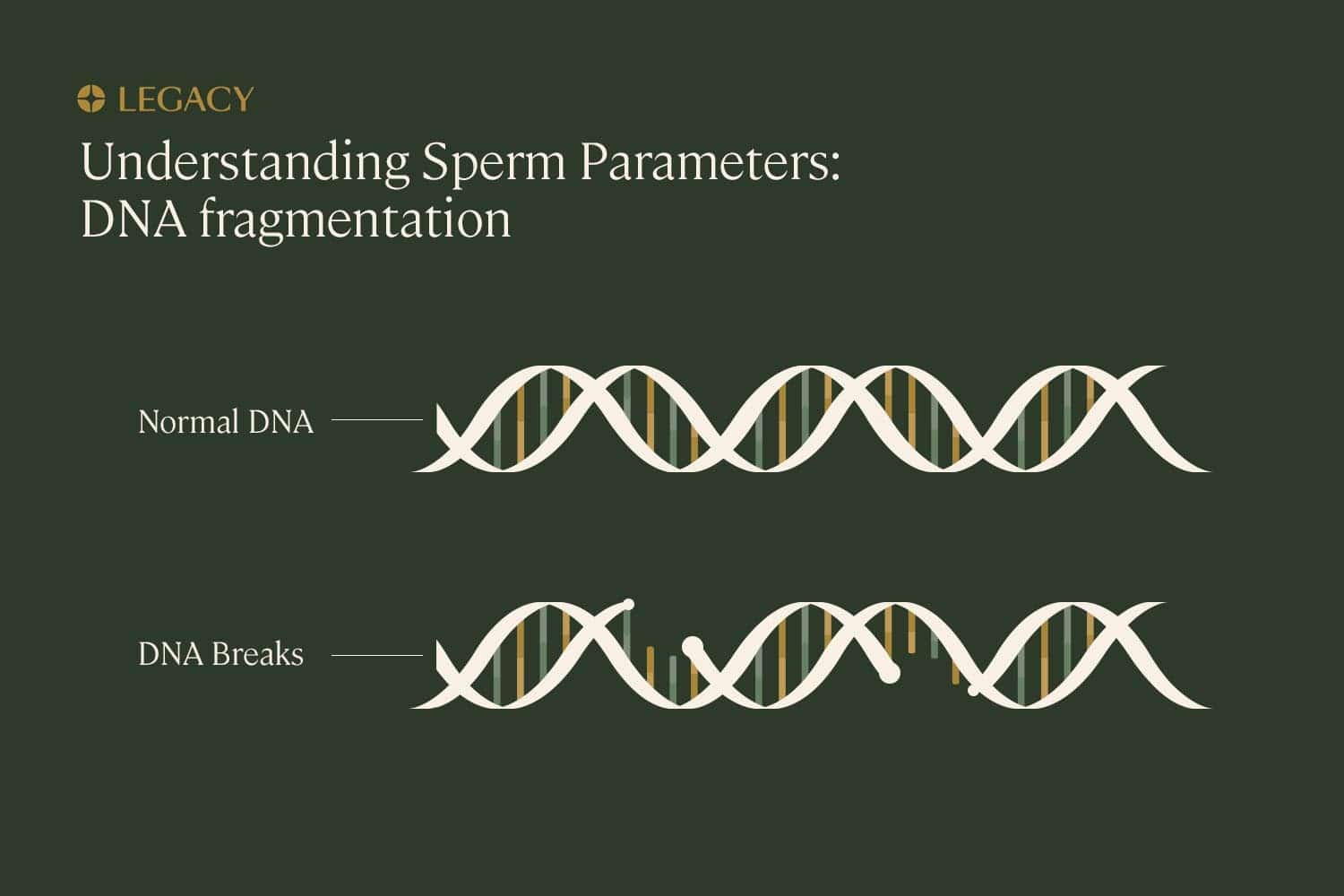 The majority of semen is “seminal plasma,” which contains fructose (sugar), enzymes, vitamins and minerals, and prostaglandins, a type of lipid (fatty acid) that helps sperm migrate from the vagina into the uterus. The fructose serves as the main source of fuel for the sperm, powering the movement of their tails as they swim to and penetrate the egg. Semen also provides a “buffer,” protecting sperm from the acidic environment of the vagina by neutralizing those acids. The proper pH and nutrients are necessary for semen to provide its protection and fuel functions. Semen pH is tested as part of a semen analysis.

In a small number of men, semen contains the presence of antibodies that actually damage sperm, as a result of dysfunction of the immune system. These are known as “antisperm antibodies,” and they can significantly impact male fertility.

Male fertility requires that the complex system of glands and ducts that create sperm, produce semen, and transport both out of the body be in good working order. Issues with or abnormalities of these structures can impede fertility.

Typically, during male orgasm, sperm is transported out of the testicles via the vas deferens, to be combined with semen in the prostate; the semen is then carried out of the body via the urethra in the penis. A blockage in the vas deferens—or not having a vas deferens at all, known as congenital absence of the vas deferens (CAVD)—can result in semen with little or no sperm in it. A semen analysis with low sperm count is one clue to this condition.

The urethra is shared by the reproductive system and the bladder. During healthy ejaculation, the muscle at the opening of the bladder tightens to prevent semen from entering the bladder as it passes through to the urethra. If this muscle doesn’t tighten properly—possibly due to nerve damage or side effects from surgery or medication—semen can enter the bladder instead of coming out the penis, a male fertility condition known as “retrograde ejaculation.” The ejaculation of very little or no semen is a symptom of this issue.

Issues with the testicles can also affect male fertility. One example is varicocele, a condition in which there’s swelling in the veins that bring blood to and from the testicles. The cause is often unknown, but this common condition—experienced by about 20% of men—can impact sperm count and quality. Another example: some men have one or two undescended testicles. Testicles should drop from the body into the scrotum, the “sack” that hangs below the pelvis, during puberty; this distance from the body allows testicles to maintain the proper temperature for spermatogenesis. If the testicle doesn’t drop, it can fail to develop correctly, and sperm counts and quality may be impacted.

These are just a few of the many ways that reproductive anatomy can impact male fertility.

While not considered primarily a “fertility issue,” sexual health problems, such as erectile dysfunction (the inability to get or maintain an erection) or the inability to ejaculate can be impediments to male fertility. These issues have myriad causes—including heart disease, diabetes, obesity, nerve damage, hormone imbalances, and psychological associations—that can be addressed with the help of a doctor.

But the relationship between testosterone and male fertility is not direct. Adding testosterone, via hormone therapy or steroids, can actually decrease sperm production, as it suppresses the release of other hormones necessary for the sperm production process: follicle-stimulating hormone (FSH) and luteinizing hormone (LH). The delicate balance of these hormones must be maintained for male fertility, and problems with any of the glands involved in producing or secreting these hormones—such as the testicles, the pituitary gland, the hypothalamus, or the thyroid—can have an effect on the hormonal profile.

What impacts a man’s fertility?

Age impacts all aspects of male fertility. Studies indicate that normal sperm morphology declines 0.2–0.9% per year of age, or a 4–18% decrease over 20 years. Additional research revealed decreases in motility of 0.17–0.6% decrease per year, resulting in a 3–12% decline in motility between age 20 and age 40. It’s also been shown in some reports that sperm count/concentration decreases with age, though this result is less consistent.

The genetic health of sperm is also impacted by age. Evidence shows that DNA fragmentation is more common the older you get. Every 8 months of a man’s life introduces a new genetic mutation into his sperm.

Other male fertility factors are affected by age as well: semen has lower levels of important nutrients with age, testosterone levels decrease over time, and the incidence of erectile dysfunction increases as men get older, according to research. So, while male fertility never really “ends” the way female fertility does (at menopause), and sperm are created daily from puberty until death, it certainly becomes more difficult to achieve a healthy pregnancy as a man ages. 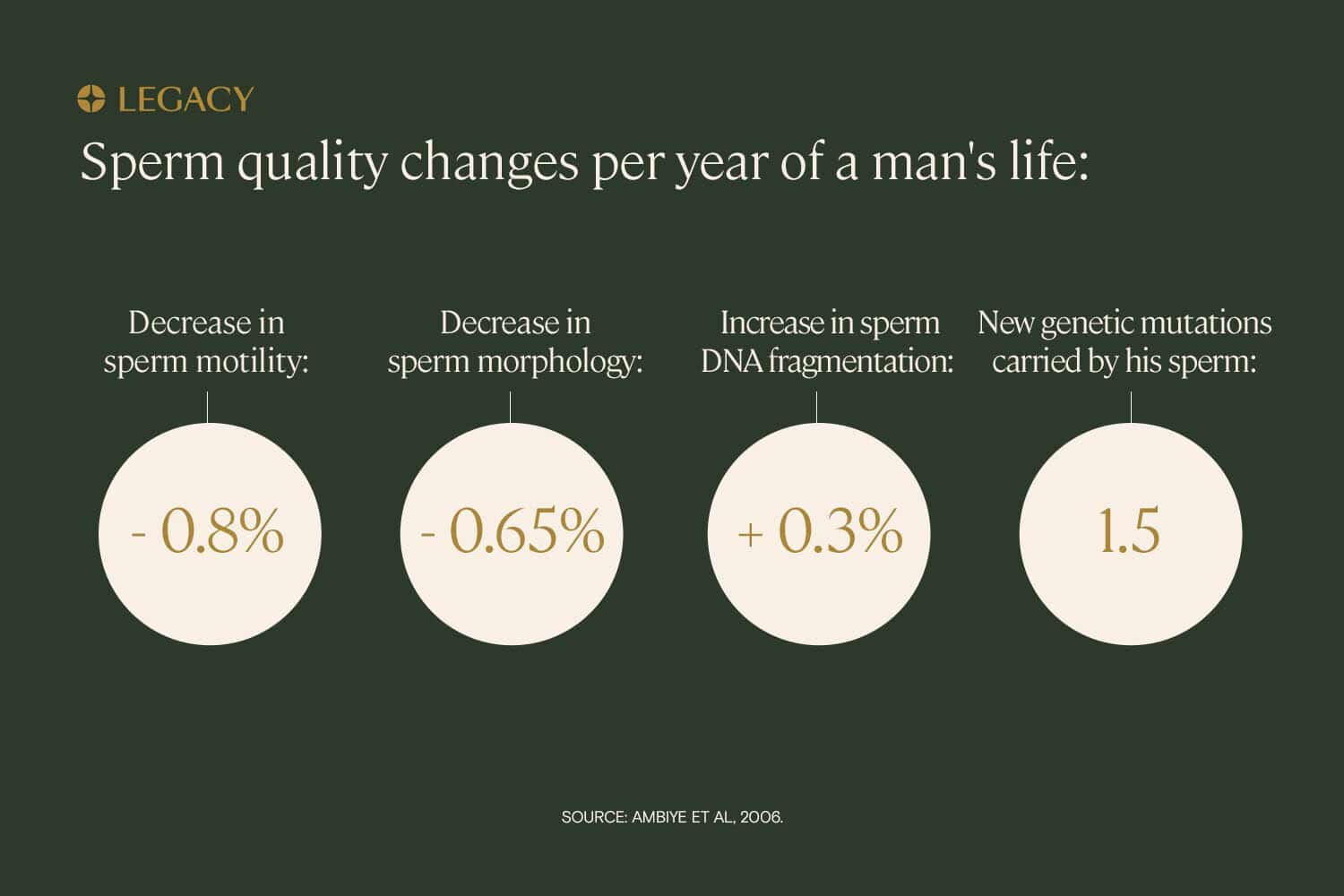 Physically active men have been shown to have improved sperm motility and morphology, as well as healthier hormone profiles for male fertility, when compared to their more sedentary counterparts. But you don’t need to become a marathoner to improve your fertility. One study found that you can improve male fertility by adopting the simple habit of walking or jogging most days of the week. Learn more about exercise and sperm health. 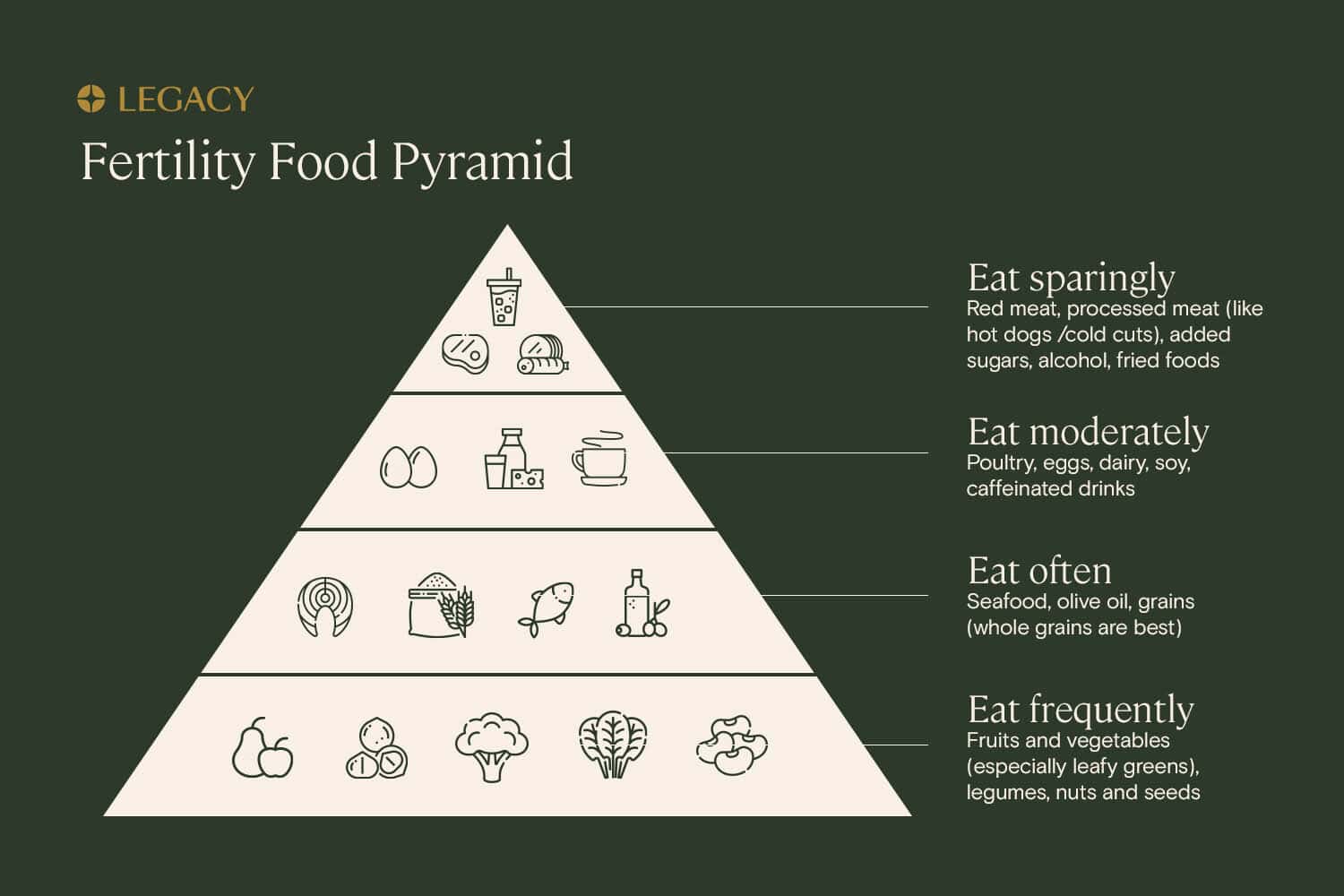 High alcohol consumption is associated with decreased sperm health, with negative impacts on all sperm parameters. Habitual binge drinking is especially detrimental to male fertility—in one study, men who drank more than 40 drinks per week had a 33% reduction in sperm concentration compared to men who drank fewer than 5 drinks per week. Learn more about alcohol and sperm health.

According to the American Society for Reproductive Medicine (ASRM), infertility rates among smokers are twice as high as among non-smokers. Smoking affects all aspects of male fertility, including sperm count, motility, and morphology. Additionally, smoking damages the genetic health of sperm. The good news is that, if you quit smoking, your fertility can improve fairly quickly—in one follow-up study, sperm motility and morphology began to return to normal within six months of quitting. Learn more about smoking and sperm health.

There are a few genetic illnesses that impact male fertility. Klinefelter syndrome is a condition in which a male is born with two X chromosomes and one Y chromosome (instead of one X and one Y). This causes abnormal development of the male reproductive organs and male infertility. Other genetic syndromes that impact male fertility include cystic fibrosis (as most men with CF have congenital absence of the vas deferens) and Kartagener’s syndrome (which impacts the ability of sperm tails to move properly).

Though less of a direct link than the single-gene disorders mentioned above, it’s also possible that certain abnormalities in sperm anatomy that affect male fertility may be inherited.

Can a man improve his fertility?

Yes, it’s possible to improve male fertility through lifestyle modifications as well as through medical interventions. Improving diet, taking up exercise, quitting smoking, and reducing drinking may all have positive impacts on sperm count and quality. Because spermatogenesis takes approximately 74 days, improvements in sperm can be seen about 2–3 months after adopting a new habit (or breaking an old one).

Learn more in our Guide to Sperm Improvement.

One option to preserve fertility is to freeze your sperm at their healthiest, youngest state. Sperm freezing ensures that your healthy sperm can be used in the years to come, as your natural fertility decreases with age. It also preserves your parenthood options in the event that an illness or accident threatens your fertility. Scientific research tells us that sperm can be frozen indefinitely with no loss in quality. 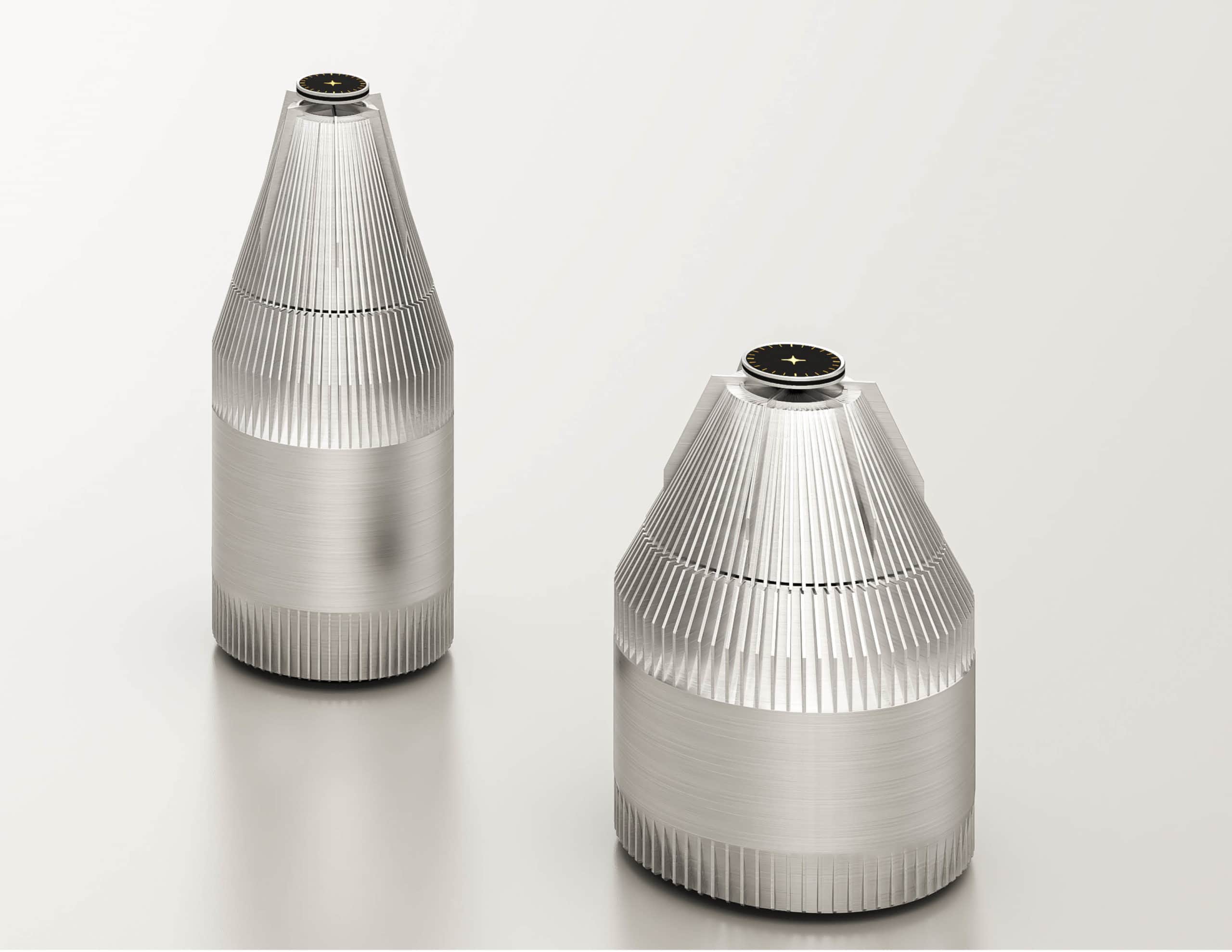